Betty (Elizabeth) and Geoff Allison, live in Pinar de Campoverde where they celebrated their Diamond Wedding Anniversary on Thursday 12th September 2019, spending a few days in Benidorm with a celebratory meal at The Benidorm Palace.

The couple first met at Billingham Co-op Youth Club, Teesside, in 1957 where Betty made the first move, asking Geoff for a ride on his shiny new BSA motorbike. 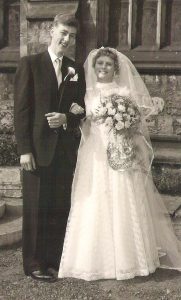 They spent the next couple of years touring most of England and were married at Norton Parish Church in September 1959.

Betty and Geoff have been blessed with four children, six grandchildren and to date three great grandchildren, and are still counting.

They sold their family home in Billingham in June 2007, moving to a villa in Pinar de Campoverde, Costa Blanca, Spain.

During the past 60 years they have shared many interests, golf, fishing, cycling, walking and popular music. Betty spends quite a lot of her relaxation time knitting and stuffing dolls and animals for donations to her chosen charities. Geoff is an avid gardener, not easy in Spain.

The pair feel very lucky and blessed to have achieved this special milestone and would like to thank family and friends for their best wishes.