For the 2nd consecutive home league match, Thader fell behind early on, leaving them a mountain to climb.  IFC Alicante are a class act, as were previous opponents Rayo Ibense, and although they gave it their all, frailties in defence were ultimately their undoing.

In between, there should have been a trip to Orihuela, but the recent gota fria put paid to that.  Details of a rearrangement are as yet unknown.

It took Segarra only 3 minutes to put IFC ahead, courtesy of an unstoppable long range drive which beat Sergio all ends up. 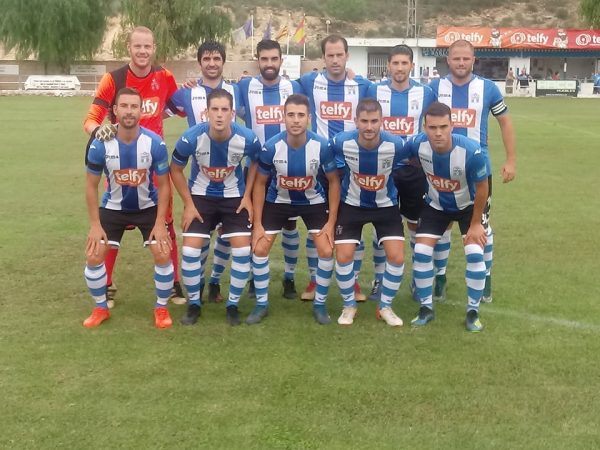 A touch of deja vu for Thader fans, some of whom had just taken their seats.  A moment of pure magic from veteran striker Rafa Gomez, produced an equalizer on 23 minutes.  Having received the ball on the edge of the box, he beat 2 players, before planting an accurate shot just inside the far post.  Less than a minute later, an inch perfect cross from the right found an unmarked Manu, who on the half volley put IFC back in the driving seat.

Straight up the other end, Mora produced a brave save from IFC keeper Edu, denying a certain equalizer.  Next it was Sergio’s turn to deny IFC front man Banderas scoring from a long range free kick.  Just before the interval, Lloyd spotted the keeper way off his line, but his audacious lob from his own half, just missed the target.

Rafa Gomez provided an assist to Nino on 47 minutes, the latter’s effort being pushed aside by Edu.  Thader were on the ascendancy, this time it was a Borja volley from way out which was agonizingly wide.

Mora could only watch, as his effort achieved the same result of his team mates.  Against the run of play, Vicente conceded a free kick in a dangerous position, but fortunately Alicante danger man Fran headed over from close range.  When Mora was fouled on the edge of the box on 72 minutes, Victor looked odds on to level the match, but his goal bound shot struck a post before bouncing to safety.

Both sides produced further attempts on goal, as this pulsating end to end match could have gone either way.  It took another long range shot, this time from Inaki, on 85 minutes to apparently put the match beyond Thader’s reach.

Enter Jorge, who from a corner headed powerfully into the back of the net, but alas it was too little too late for a Thader side who gave their all.  Bookings for Borja and Jorge, plus 5 opponents, kept up the 7 per match average so far this season.