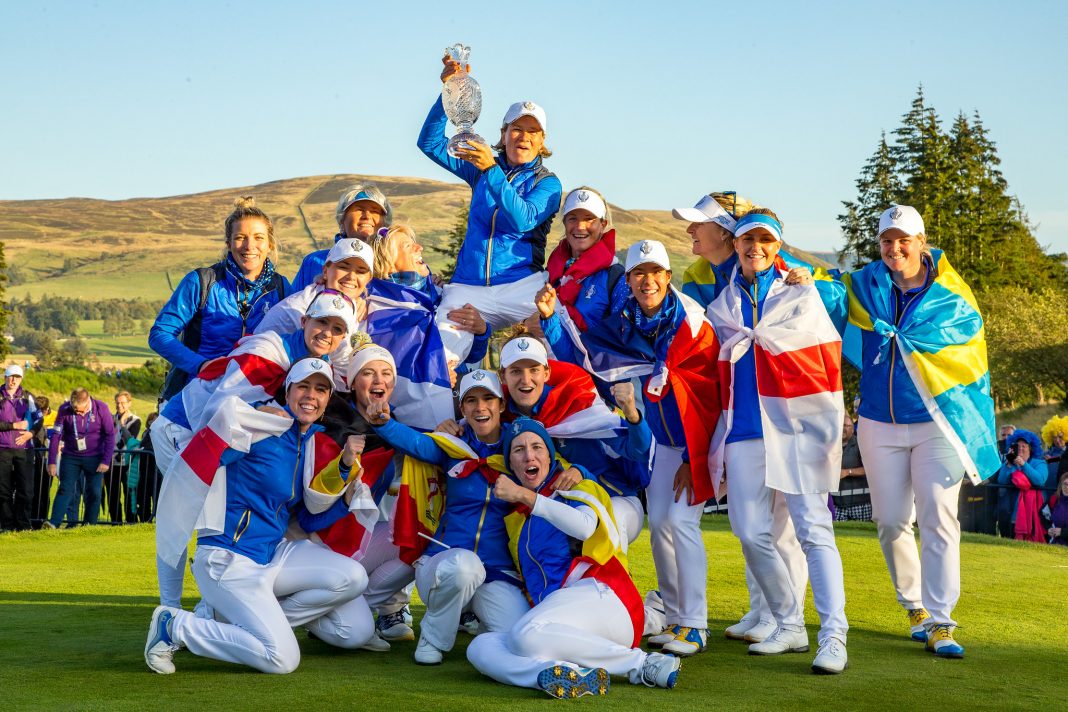 Europe produced one of the greatest fightbacks in golf history to snatch a dramatic 14 ½ – 13 ½ victory over America in the 16th Solheim Cup at the PGA Centenary course at Gleneagles.

For the last 45 minutes of a truly enthralling contest it looks as if the visitors would emerge as victors but that was before Anna Nordqvist, Bronte Law and Suzann Pettersen conspired to turn the result completely on its head.

The Americans needed just half a point from the last three games to retain the trophy but first Nordqvist beat Morgan Pressel and then Law came from behind to snatch an improbable win over Ally McDonald before Pettersen completed one of golf’s greatest acts of escapology with a winning birdie putt against Marina Alex on the last.

It is no wonder the celebrations were tumultuous and no surprise either that the Americans looked shell-shocked because they scarcely deserved to lose.
In fact, the match was so close that no less than six of the 12 singles went to the 18th and Europe edged it purely because they won three and halved one of those.
The timeline best tells the story of the final day.

Carlota Ciganda put the first point on the board for the home side when she beat Danielle Kang on the last in a match in which there was never more than one hole it in but Nelly Korda then evened things up at 9-9 when she came back from three down after nine holes to beat Caroline Hedwall by two holes.

Europe then edged ahead again when Georgia Hall beat Lexi Thompson 2 & 1. The American was in front in that game early on but seemed to be struggling with a back problem and in the end could not contain Hall who went ahead for the for first time on the 11th before claiming another point for the home side on the 17th.

Europe now held a slender 10-9 lead in the match and they went two points ahead when French rookie, Celine Boutier, also came from behind to beat American counterpart Annie Park 2 & 1. That meant the 24-year-old captain’s pick completed her first Solheim Cup with four wins in her four matches and completely vindicated the faith Catriona Matthew had placed in her. It also saw her tie Hall as the top points-earner in the home side.

Europe was chasing 14 ½ points to win but they remained 3 ½ points short of that target when Jodi Ewart Shadoff lost 5 & 4 to US rookie Brittany Altomare. The US revival continued first when Angel Yin led almost all the way to even the match up at 11-11 with a 2 & 1 win over Azahara Munoz and then when Jessica Korda completed a memorable family double with a 3 & 2 comeback victory over Caroline Masson.

That win by the elder Korda sister meant that for the first time in the entire match America held the lead and Europe’s predicament worsened when Charley Hull lost the last hole to halve her match against Megan Khang and again when Anne Van Dam missed a 12-foot birdie putt on the last that would have given her a halve with Lizette Salas.

That one hole win by Salas took the American total to 13 ½ points and meant they just needed half a point to retain the trophy. Strange as it seemed at the time, it was not to be.
At that stage, Anna Nordqvist was four up through 13 holes on Pressel and the Swede went on to win 4 & 3 but Pettersen and Law were tied with Alex and McDonald when both had to win to stop America winning the match.

For three days of intense competition there had been little to choose between the two teams so it was fitting the match was to go right to the wire.
English rookie, Bronte Law, was the first to grasp the moment when she won both the 16th and 17th to beat McDonald 2 & 1 and then seconds later, up ahead at the last, controversial captain’s pick Pettersen, a veteran with eight previous Solheim Cup appearances behind her, holed a ten-foot birdie putt to beat Alex and secure what was one of the most dramatic victories in the history of the game.

The delirious European team rushed onto the green to hug the Norwegian, while the Americans were left to ponder what might have been.

“It’s a dream come true,” said Europe’s captain, Catriona Matthew. “All 12 of these players, they played their hearts out. We knew it was going to be close today, but to come down to the last putt and for Suzann to hole it, it’s incredible. She got a lot of stick when I picked her, but it shows it was the right one.

“I could barely watch, actually,” she added. “It’s far worse watching. “When you’re playing, you’re kind of in the zone and in the moment, and you’ve got control over things. But watching you just have to have faith in the players. There’s nothing else you can do.”
Juli Inkster, the US captain for a third time in succession, said: “It’s disappointing but, you know what, I told them afterwards the sun’s going to come up tomorrow. We played great; the Europeans played great. You tip your hat and you move on to (the next Solheim Cup at) Toledo.”

Suzann Bows Out at the Top

Suzann Pettersen has announced she is to retire for competitive golf after a sparkling professional career spanning two decades.
Moments after holing the birdie putt that secured Europe’s victory in the 16th Solheim Cup, the 38-year-old Norwegian, confirmed she would be hanging up her clubs with immediate effect.

“That’s it, I’m done,” she said. “I’m closing it down tomorrow.
“I think it’s the perfect closure, there’s no better way to end my professional career. I never thought I was going to be here four months ago until I met Beany (Catriona Matthew). So, to end it this way, that’s very special.”

Pettersen bows out of professional golf having won two majors, 15 LPGA tour titles and seven on the Ladies European Tour. This year marked her ninth appearance in the Solheim Cup, stretching back to 2002, during which she won 18 matches, tied third on the all-time European list alongside Matthew, behind only Laura Davies and Annika Sorenstam.

Her most successful year came in 2013 when she won five tournaments around the world and posted an additional eleven top-ten finishes. She ended the year as World No. 2, just behind Inbee Park.

Suzann arrived at Gleneagles as one of Matthew’s captain’s picks having played just twice this season following the birth of her son, Herman, last September but that didn’t stop her combining with Anne Van Dam to beat Danielle Kang 4 & 2 before delivering the winning point against Marina Alex in the singles.
“It didn’t surprise me when Suzann holed that putt,” said US captain, Juli Inkster. “It was great. I mean, I knew she knew the Cup was on the line. And to go ahead and roll that putt in, that’s impressive. That’s why she’s Suzann.”

She also received a glowing tribute from teammate Anna Nordqvist.
“I think I’m speaking for everyone on this team,” she said. “Suzann has been a big role model for all of those the last couple of years, more than that.

“I remember my first Solheim Cup in 2009, I got to play with a lot of my idols growing up. It was Laura Davies, Helen Alfredsson, it was Beany, it was Mimmi Hjorth and Suzann Pettersen. I got paired with Suzann in my second match and it was really cool. It was definitely one of the best highlights of my career.

“She’s going to be missed,” Nordqvist added. “She’s a rock star. She’s such a great character and a big role model for all of us.”
RESULTS