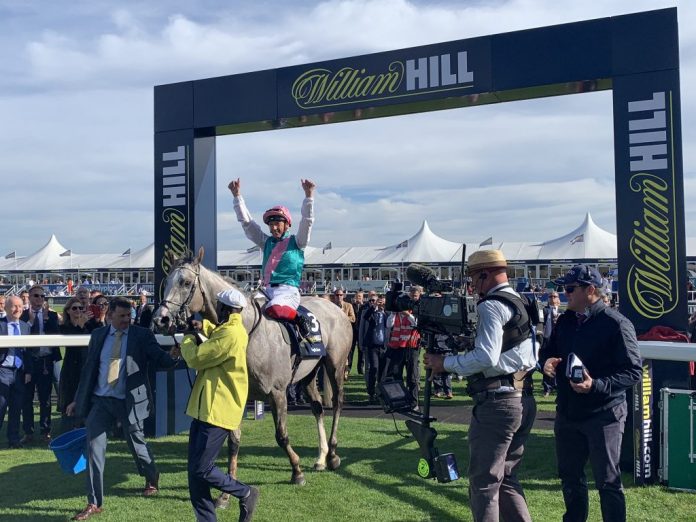 LOGICIAN fromthehorsesmouth.tips selection maintained his unbeaten record – with an emphatic victory under Frankie Dettori – in the St Leger at Doncaster.

“The St Leger has been very lucky for me – Logician was the hot favourite – hopefully the punters lumped on!,” said Dettori.

Logician’s success was the sixth time Italian Dettori has chalked up  victory in the world’s oldest Classic.

Trainer John  Gosden, who chalked up his fifth St Leger victory, said: “He took Frankie on, early, but he eventually relaxed.

“He stayed the trip well, and he’s won in a record time – with one flick of the stick, he quickened.

“I think he’d be better on good ground, rather than good to firm. And will probably revert to a mile and a half next year.

“He’s done so much, so quickly, this year and we’ll put him away now. He won’t run again this season.”

Dettori added: “It’s been a great year. I ride for a great trainer. We’ve won two Classics this year – we’ll enjoy this moment before we get ready for the Arc.”

Dettori, set to ride Enable in the Arc de Triomphe, said: “John has always been keen on Logician and there’s plenty more to come next year. From over two furlongs out I knew I’d won.”

Under Dettori, Logician gained a two-and-a-quarter length victory, ahead of Sir Ron Priestley, trained by Mark Johnston and ridden  by Franny Norton.