TURN the clock back 100 years and Patrick O’Connell was wearing the captain’s armband at Manchester United.

It was to be 16 years on from playing at United that Irishman O’Connell lead Real Betis to their only La Liga title.

O’Connell’s achievement at Real Betis is something that was officially recognised in 2017, marked with a sculptor in honour of him at the Estadio Benito Villamartin.

Real Betis’s musuem showcases the only La Liga trophy won by the club in 1935, during O’Connell’s reign. 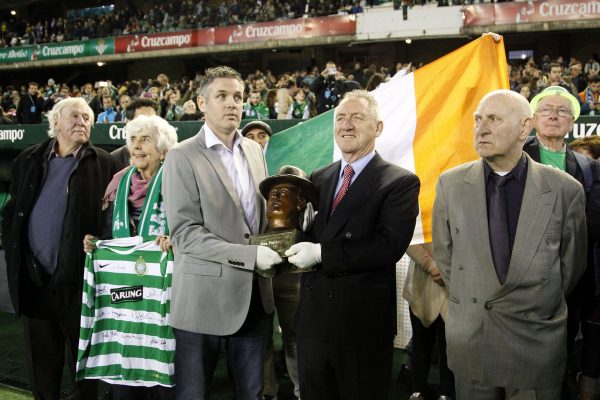 O’Connell’s career began at Belfast Celtic, and he went on to become the first Irishman to captain Manchester United.

While at Barca he took the team on a tour of Mexico, Cuba and New York – during the Spanish Civil War – to raise money that ensured the club’s survival.

O’Connell was given the title of honorary consul in 1937 by the last Republican Government of Spain.

O’Connell left Spain and moved to London – where he died destitute – in 1959, after being unsuccessful in finding employment.

The Cup won by Patrick O’Connell as manager sits in the reception area at Real Betis.

A Blue plaque of O’Connell is also erected in west Belfast in his memory after football stars including Roy Keane, Patrick Kluivert and Franz Beckenbauer, helped raise funds.

Born in 1887, O’Connell was transferred to Sheffield Wednesday from Belfast Celtic, and joined Hull City.

O’Connell was buried in an unmarked grave for an astonishing 57 years – before the Patrick O’Connell Memorial Fund was founded.

Patrick O’Connell lived at 63 Albert Street in the lower Falls area of Belfast, when he played at Belfast Celtic FC.

Patrick’s first son, Patrick junior, was born in the house, and Patrick was holidaying in Belfast, when he received a Telegram from FC Barcelona, detailing the Spanish Civil War had broken out.

2019 is the 82nd anniversary of FC Barcelona’s tour of the Americas, led by Patrick O’Connell, which saved the club from financial ruin.

An exhibition documenting the life of O’Connell, credited in saving FC Barcelona, took place in Belfast in 2017.