Mojácar’s Fiesta continued yesterday with the traditional carrying of water and floral offerings in honour of the town’s Patron Saint, San Agustín, with all those taking part gathering at the Fuente to begin the ascent to the Santa María Parish Church in the historic Old Town, accompanied by the Municipal Band.

This event is one of the most anticipated in the whole fiesta by both locals and visitors who come to see those dressed in typical Mojácar or flamenco outfits.   They make this colourful pilgrimage with their traditional water jugs and hundreds of flowers to place at the Saint’s feet on a route that is the same one that goes back to times immemorial, as the women of Mojácar once walked to their homes with water jugs on their head or waist.

This custom is re-enacted at Fiesta time to thank their Patron Saint for the blessing of water and the fountain of Mojácar which has never lost its flow throughout the centuries, giving life to the people of the town.

Ready to greet them at the door of the beautiful 16th-century fortress church, which is built on an old Mojácar Arab mosque, is the Parish priest, José Esteban Jerez, in preparation for his blessing of the offerings.

Now in the final day, Mojácar’s San Agustín fiesta has now held most of its important events, such as horseback ribbon races that have been performed in the town for over 200 years, where the local ladies hang ribbons for riders to pick them as they gallop by. 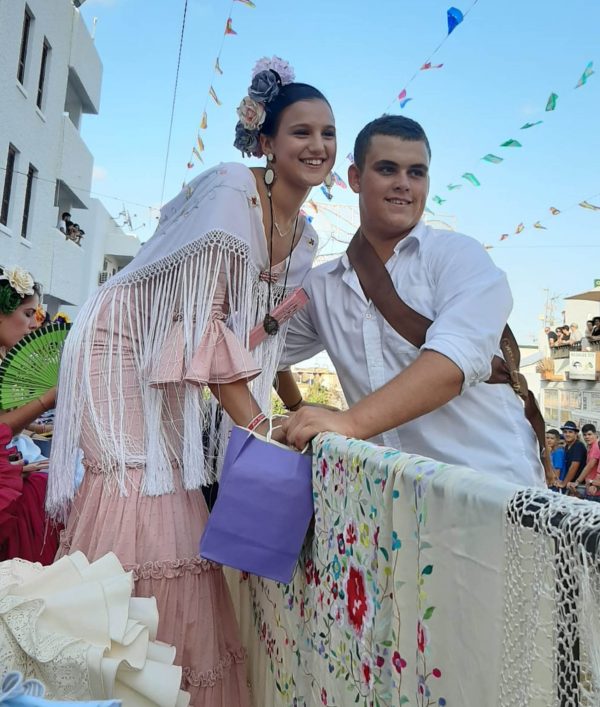 The ever popular last open air dance with music by Norte and Melodías was only interrupted by fireworks at 2 a.m. filling Mojácar’s sky with colour and light.  Today, Wednesday 28th, the holidays draw to an end with the Holy Mass in honour of their Patron at noon followed by the traditional procession of the Saint’s image carried on the men’s shoulders through the streets of the Old Town, accompanied by the Town Band.

However, there is still the midday fair to enjoy in the Plaza Nueva, with entertainment, good food with music and dancing.  This is followed at 6.30 p.m. by the children’s bicycle ribbon race, a much appreciated activity for the young ones who will carry the traditions of this town, one of the Most Beautiful Villages in Spain, into the future.

Mojácar approves contract for Operation of its Care Home

IV ‘Fotomatón Festival’ to be held in Orihuela

THE SHOW MUST GO ON!

Mass In Mojacar In Honor Of Its Patron Saint, San Agustin