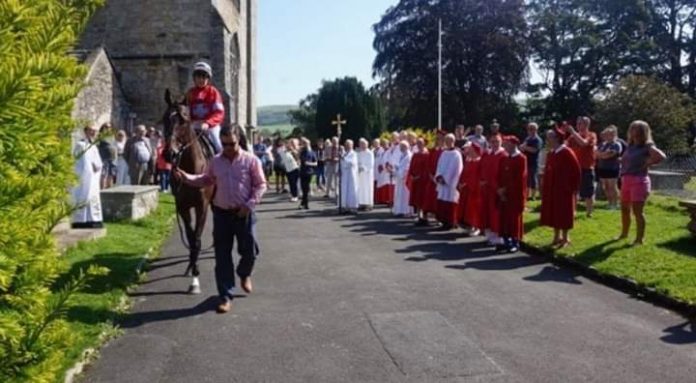 A CENTURY old traditional ceremony took place at Cartmel Priory after racehorse Think Ahead was successful at the Cumbria track on August 24.

“It was a fantastic turnout,” said Jennie Moffatt, in the wake of James Moffatt trained Think Ahead’s success.

The Blessing of the Racehorse service was held at Cartmel Priory, in the village of Cartmel, on Sunday, August 25.

Think Ahead stood outside 800 year old Cartmel Priory and received a formal Blessing from vicar The Rev. Nick Devenish.

Think Ahead, ridden  by Charlotte Jones, was joined by The Steward, ridden by Callum Bewley, in the winner’s enclosure at Cartmel on Saturday – the duo recording James Moffatt’s record 50th winner of the season.

“We couldn’t have done it without our mum,” said James Moffatt, in the top 10 of National Hunt trainers.

“Horse racing is entwined deep into the history of Cartmel. It is fitting that this unusual but lovely service continues to be held in the village year after year,” said Geraldine McKay, Cartmel racecourse manager.

The Blessing of a Racehorse service is an annual event held at Cartmel Priory during the August meeting at nearby Cartmel Racecourse.

Think Ahead ridden by Polly Steel, travelled to Cartmel Priory from the Pitt Farm Stables of trainer James Moffatt.

Those who attended the Blessing service celebrated with a glass of Prosecco, courtesy of Cartmel racecourse management, to toast the season.

Racing was first recorded in Cartmel in the 12th century at a time the Priory Monks rode mules.

Cartmel Racecourse is one of the world’s most unique and picturesque settings, staging annual meetings during May and August.

Think Ahead at Cartmel Priory after receiving a formal blessing from vicar The Rev. Nick Devenish.

Ayr set to recommence racing in Scotland on June 22

No deaths in Valencian Community for the first time since March...