Despite a leaking paddling pool, 500 meters from the course, being blamed for the spectacular crash of two teams during the 13.4-kilometre course around Torrevieja, the 74th edition of the race got off to a spectacular start as Columbia’s Miguel Angel Lopez became the first rider to claim the leader’s red jersey at La Vuelta 19 after his Astana Pro Team dominated the opening team time trial on Saturday evening.

Even as the time trial got underway in the early evening the temperatures were peaking at 30 degrees but despite the heat many could have been excused for thinking that they were at the North Pole with the backdrop of the large white mountains of salt that provided the setting for the start of the Tour.  The “snowy” landscape was only broken by the colours of the jerseys of the 22 teams that provided a regular shuttle from the top of the salty mountain. 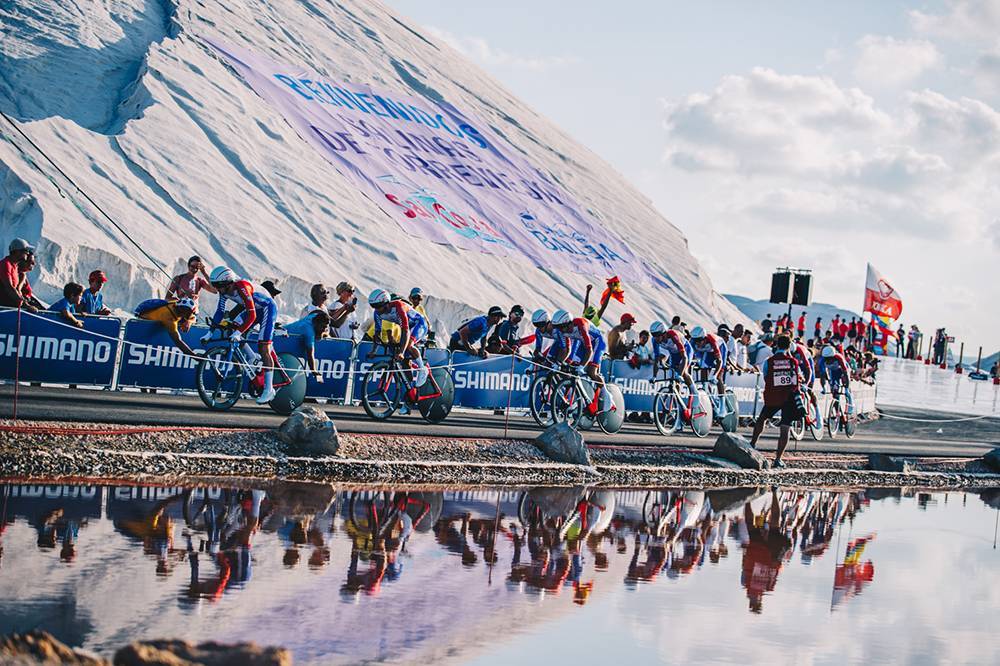 Of the 176 riders participating in La Vuelta 19 from the spectacular Salinas de Torrevieja Dimension Data were the first to start, just before 7pm. They set the first time of 15’25” and held the lead for about ten minutes, until it was bettered by CCC Team which clocked 15’06”.

Miguel Angel Lopez led the Kazakh team through the line to claim the first red jersey as Deceuninck – Quick Step finished 2” behind them.

Pre race favourites Jumbo-Visma were aiming for glory but their time trial was quickly hampered by mechanical problems for their American rider Sepp Kuss inside the first kilometre. The Dutch squad was trailing by 7” at the intermediate point but they missed a bend in the second part of the trial and both Primoz Roglic and Steven Kruijswijk crashed into the side of the road. They got back to Tony Martin, George Bennett and Robert Gesink, the only riders who didn’t crash, but they had lost 40” at the line.

UAE Team Emirates also saw their riders slam into the road during their timed rides losing both time and skin in the first stage of the three-week race.

Sports directors Addy Engels described the incident as “far from ideal” and that tour organisers said a paddling pool accident was to blame.

The tour organisers went to the house where the water came from, 500 metres from the route, on a steep slope that sloped straight onto the course.

In 2019, Miguel Angel Lopez is a strong favourite to join this list with the support of a very strong and experienced team. The eight riders have taken part in La Vuelta on 32 occasions. Only Movistar have more (36).

Speaking after his win he told journalists “I’m very happy because we’ve done things well. It’s been thanks to the whole team, to everyone’s effort, that we took this victory. We didn’t make a choice (as to who would cross the line first). It just seemed to happen. I was 2nd behind Gorka (Izagirre) when we entered the last curve and he let me pass so I would ride the last 150 metres. We’re very happy and we’re going to enjoy every moment La Vuelta 19 gives us. We’ve worked well in the past years and the time has come (to enjoy). We have the red jersey and we’ll go with thanks because I have a great team to support me.”

Other than the spill by Pre race favourites Jumbo-Visma there was one incident that showed the human side of the race support when an Euskadi Murias team car, unable to negotiate a bend, crashed into a building at high speed during the stage. Fortunately race stewards were quickly on hand to help the occupants of the car to safety with onlookers saying that no one was injured.