The world of cycling will focus on both the salt flats and the port on Saturday as the 2019 edition of La Vuelta (The Tour of Spain) gets underway in front of an estimated television viewing audience of 400 million people in 189 different countries.

Stage One is the traditional time trial which will feature 22 teams and 176 riders including Columbian legend Nairo Quintana (Movistar Team) who is one of the race favourites.  “It would be the greatest pride to win La Vuelta and have a Latin American party,” he said. Quintana. The Colombian climber, was the winner of La Vuelta 16, is one of the main Latin American talents in the race.

He will have fierce opposition from Jumbo-Visma, who have brought to the Costa Blanca their leaders from the Giro, Primoz Roglic (3rd overall), and the Tour de France, Steven Kruijswjik (3rd), with high ambitions. “To finish on the podium of a Grand Tour is nice but I’ve already done it at the Giro so I want to win here”, Roglic said. “I’ll try everything to win it.”

Kruijswijk, who finished 4th at La Vuelta 18 and proved he could do well in both the French and Spanish Grand Tours, also comes with high ambitions, as he told the media on Thursday: “I’m here to help the team win La Vuelta but I’d like to do it myself of course. Primoz is also one of the favorites and we have to see halfway through La Vuelta. We start with the ambition to be up there and we can play some games, being so strong as a team.”

The Time Trial wil get underway on Saturday evening at 6.52 pm and is expected to end at approximately 8:30 p.m., the main stage will be Torrevieja, its salt flats and its promenades and beaches. 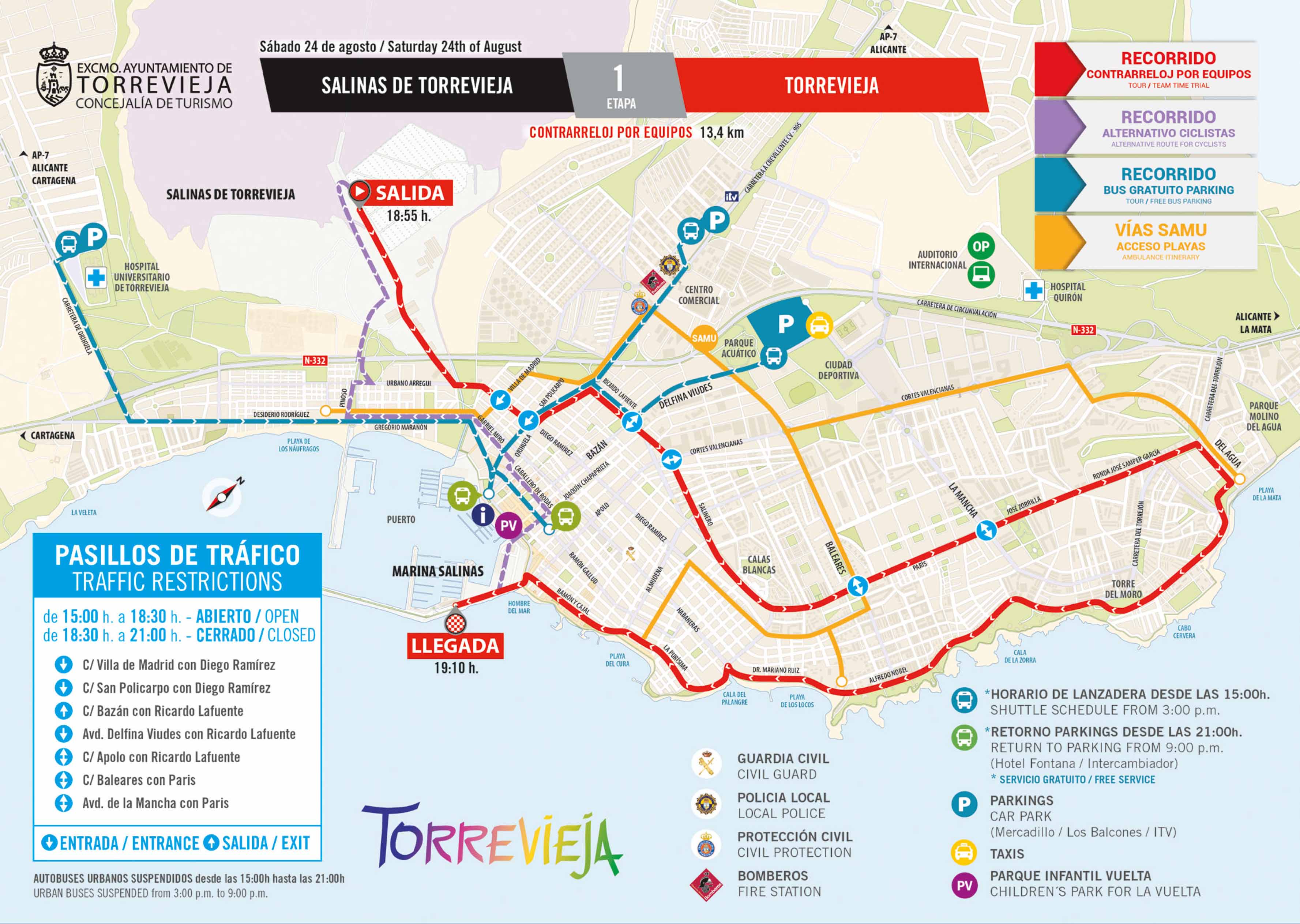 The start will be made from the spectacular location of the salt flats, and riders will race as teams to the Dique de Levante where the 12 kilometers team time trial will end. It will be the first time in the history of La Vuelta that it leaves from Torrevieja.

Today, Friday, August 23, from 3:00 p.m., Paseo Vista Alegre will host a spectacular exhibition of the almost 80 Civil Guard vehicles that are taking part in the La Vuelta security operation. Likewise, the activity called “Parque Vuelta” is also planned on August 24, at Paseo Vistalegre, from 4:30 p.m. to 10:30 p.m.

The Vuelta Park will feature a large stand area for the supporters, participants and sponsors of La Vuelta, with entertainment, solidarity activities, raffles and various exhibitions.

Also taking place on Saturday, August 24, at 9:00 a.m., there will be a charity march from the Plaza Encarnación Puchol de La Mata, that will travel around the area handing out 1000 T-shirts donated by AGAMED. The cost of taking part in the charity event is two euros.

Finally, on the same day, August 24, also in the Plaza de Encarnación Puchol de La Mata, from 11:00 a.m., there will be a Trial Bike exhibition featuring Dani Cegarra, three times World Champion and 11 times number 3 in the world; and his son, Dani Cegarra Jr., runner-up of the World and champion of Spain.