In true ‘Roy of The Rovers’ style goalkeeper Andrew Lonergan found himself unexpectedly included in Liverpool’s UEFA Super Cup tie against Chelsea in Istanbul this month – after playing at Rochdale last season!

“I got a call from Liverpool and had no hesitation in signing a one year contract,” said Lonergan, who collected a European winner’s medal – as an unused substitute.

Liverpool boss Jurgen Klopp moved for Lonergan as cover for Alisson Becker, following a sustained calf injury in the Premier League win against Norwich City, in the first game of the 2019-20 season.

Veteran stopper Lonergan, 35, (pictured) who began his career at home City club Preston North End, had been training with the Liverpool squad in pre-season, after being released by League One club Rochdale.

Lonergan, on loan at Rochdale from Middlesbrough, who played 232 games for Preston, making his debut aged 16, has also played at Bolton, Fulham and Wolves.

“I’m focused on my time at Liverpool this season,” said Lonergan, who featured against Sevilla, in Liverpool’s pre-season tour in America. 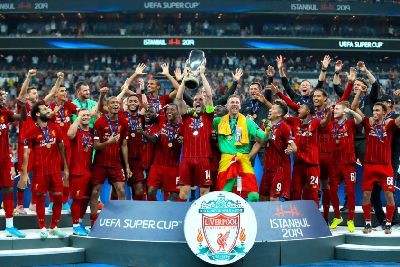