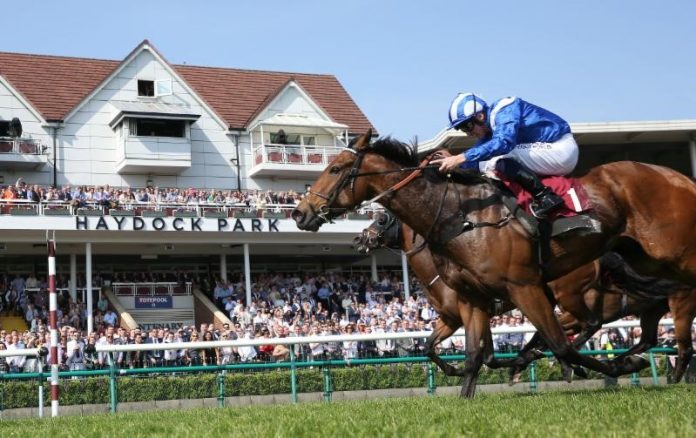 Battaash, Ten Sovereigns and Mabs Cross are amongst the runners going to post in the 5f Coolmore Nunthorpe Stakes at York on August 23.

Group 1 winner Mabs Cross, trained by Michael Dods, who went down in a photo-finish in the 2018 race, behind Alpha Delphini, is priced at 5-1.

Dods, citing Mabs Cross as being a stronger horse this year, runs in the Nunthorpe full of confidence: “We are hoping Mabs  Cross can run a big race,” said Dods.

Going head-to-head with Battaash and Ten Sovereigns, Dods said: “We are looking forward to York in the Group 1 – she will need to be on top form.”

Post-race trainer O’Brien revealing home-work on the gallops at Ballydoyle, said: “His works and times were unbelievable.

“His last piece of work, he broke 11 seconds every furlong, for four furlongs, so for a horse to be doing that, it’s very, very quick.”

Undefeated in 2018, O’Brien said: “We knew he was very good from last year – but we trained him for a Guineas – and he hadn’t really clicked into sprinting at Ascot.

“He’s like all those good athletes – goes a very high pace very easily – and when you ask him, he quickens.”

Battaash gained a third successive victory in the £312,000 King George Qatar Stakes at Goodwood this month, under jockey Jim Crowley.

Trained by Charlie Hills, Battaash was successful gaining a ninth career win over a 5 furlongs, Group 2 race: “It is such a pleasure to be involved in a horse like Battaash – to win three King George Stakes – the first time it has been done.

“Battaash is a special horse and is taking his racing much better. Sheikh Hamdan is keen to go to York,” said Hills.

“Battaash has not won at York, but there is no reason why he would not handle the track. There are only so many Group Ones, over five furlongs, so he’s got to go back,” said Hills.

TOO Darn Hot has been retired, following diagnosis of a hairline fracture of a hind cannonbone.

Three times Group 1 winner Too Darn Hot, trained  by John Gosden, suffered the injury during his success in the Sussex Stakes at Glorious Goodwood.

“Too Darn Hot underwent, and came through emergency surgery, to his right-hind cannon after x-rays revealed a hairline fracture,” said Simon Marsh, racing and bloodstock manager to owners Andrew and Madeleine Lloyd Webber.