Things were getting back to normal on Friday morning following the rupture of a pipe in an Orihuela Costa Wastewater Treatment Plant (WWTP) that caused a spill of more than 56,000 litres of raw sewage to flood large parts of La Zenia urbanisation and it’s surrounds on Thursday.

The breakage occurred on the ‘boat roundabout’ very close to La Zenia Boulevard Shopping Centre, early on Thursday afternoon, causing thousands of litres of sewage to be discharged from the sewage treatment plant situated close by in Calle Lapislazuli.

As the sewage flowed out of the plant the stench was unbearable as it followed the natural slopes of the road down Avda de Villamartin and across the N332 to the blue flag beaches at Cala Bosque and La Zenia, leaving thousands of holidaymakers, tourists and drivers watching in absolute disbelief.

However the Ayuntamiento was quick to respond with both the Councillors for Infrastructure and for the Coast, Ángel Noguera García and Ramón López Cabrera, on hand and coordinating repair work at a number of different locations.

While engineers worked through the night on the breakage, sand dams were built at both Cala Bosque and La Zenia beaches to contain the sewage, which at the peak was almost 12 inches deep, and prevent it spreading onto the sands.

The councillors explained to The Leader newspaper that the breakage was the responsibility of the WWTP of the Generalitat Valenciana which manages a joint venture of the Depuracion de Aguas del Mediterráneo, SL and SAV, Agricultores de la Vega de Valencia, and that their staff were on hand and dealing with the matter in less than two hours.

However this was not quickly enough to stop over 56,000 litres of sewage spreading across the entire area from a ruptured pipe carrying semi treated water across, from the La Zenia plant to a reservoir in Lomas de Cabo Roig, and then on to San Miguel where it is used by farmers to irrigate their fields.

Councillor López Cabrera said that, while the repair work continued, his priority was to ensure that the spill didn’t get as far as the beaches, which in the middle of August, were packed to absolute capacity, hence the need to build the sand dams at Cala Bosque and La Zenia, which he subsequently hailed as a complete success.

But as the work went on, and as the sewage continued to flow late into the afternoon, many residents living and passing through the area told this newspaper that the spill had left a terrible smell across the whole area, even drivers and the people who were walking down surrounding streets had to cover their nose because they could not breathe, an experience that I actually endured myself. 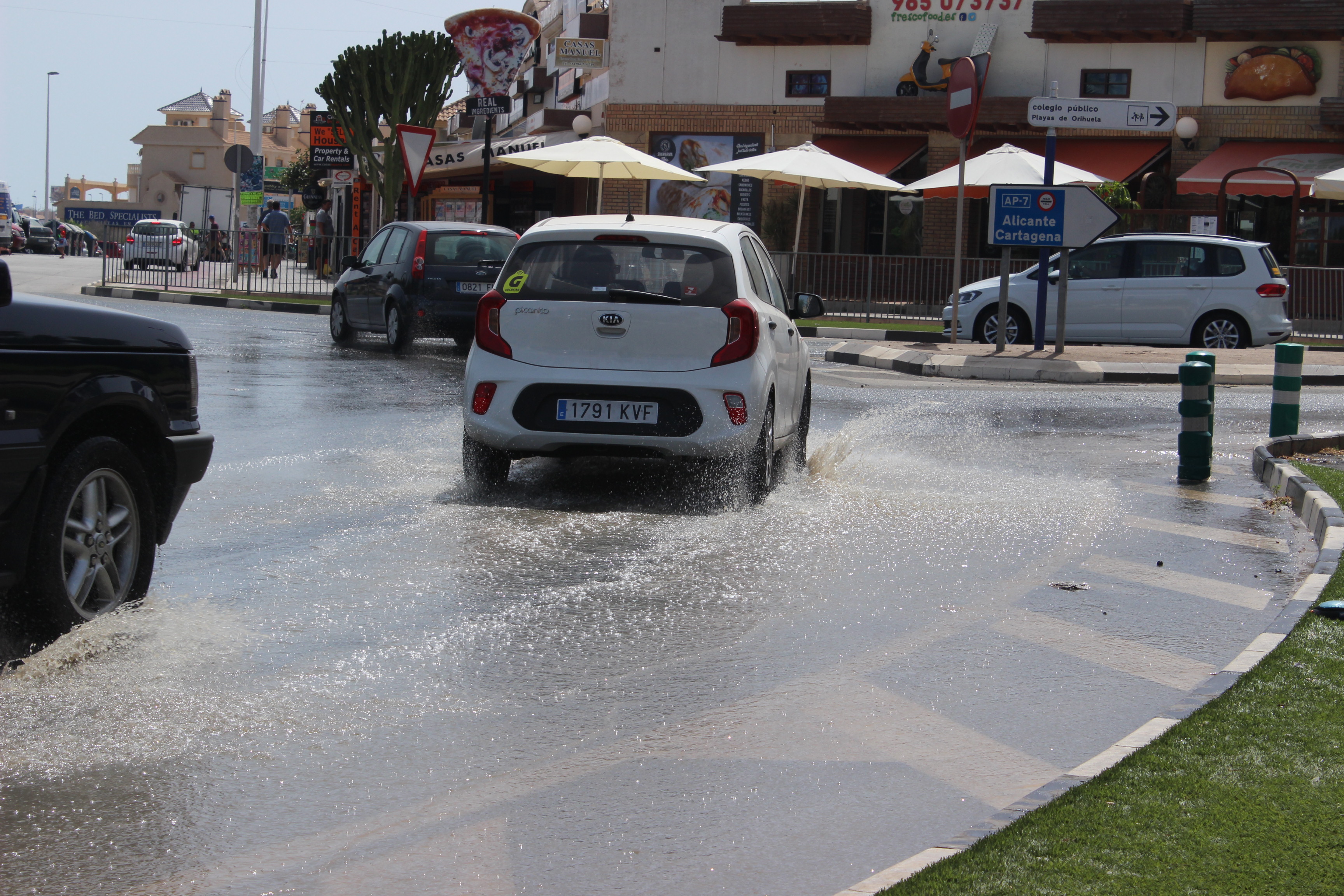 Councillor Noguera said that on Friday he would be meeting with those responsible for the management of the treatment plant to “ensure that this doesn’t happen again.” He added that his teams of cleaners had been out for much of the night cleaning La Zenia beach and its surrounds to eliminate any trace of sewage, and by early on Friday morning much of the area was back to normal.

Hendrick Reynes, Vice President of the urbanisation adjacent to the waste water station, told The Leader that he has been asking for the council to act on the regular problems created by the plant for over 3 years, but to no avail. He said It is in very bad shape, the smell is unbearable and there are many sewage leaks into C/ Lapsillazzuli.
Perhaps now we might get something done.

The Orihuela Costa Water Treatment Plant treats an annual flow rate of 18,000 cubic meters per day and provides a service to around 90,000 inhabitants.

The management company, that only won the contract to operate to system a few months ago, announced on its website that in the coming months “various projects would be undertaken to improve the facilities, that will increase the level of reliability, energy efficiency and processing of the biological treatment, pumping equipment and the computerisation of the control system, backed by their comprehensive experience in managing facilities with similar characteristics.” 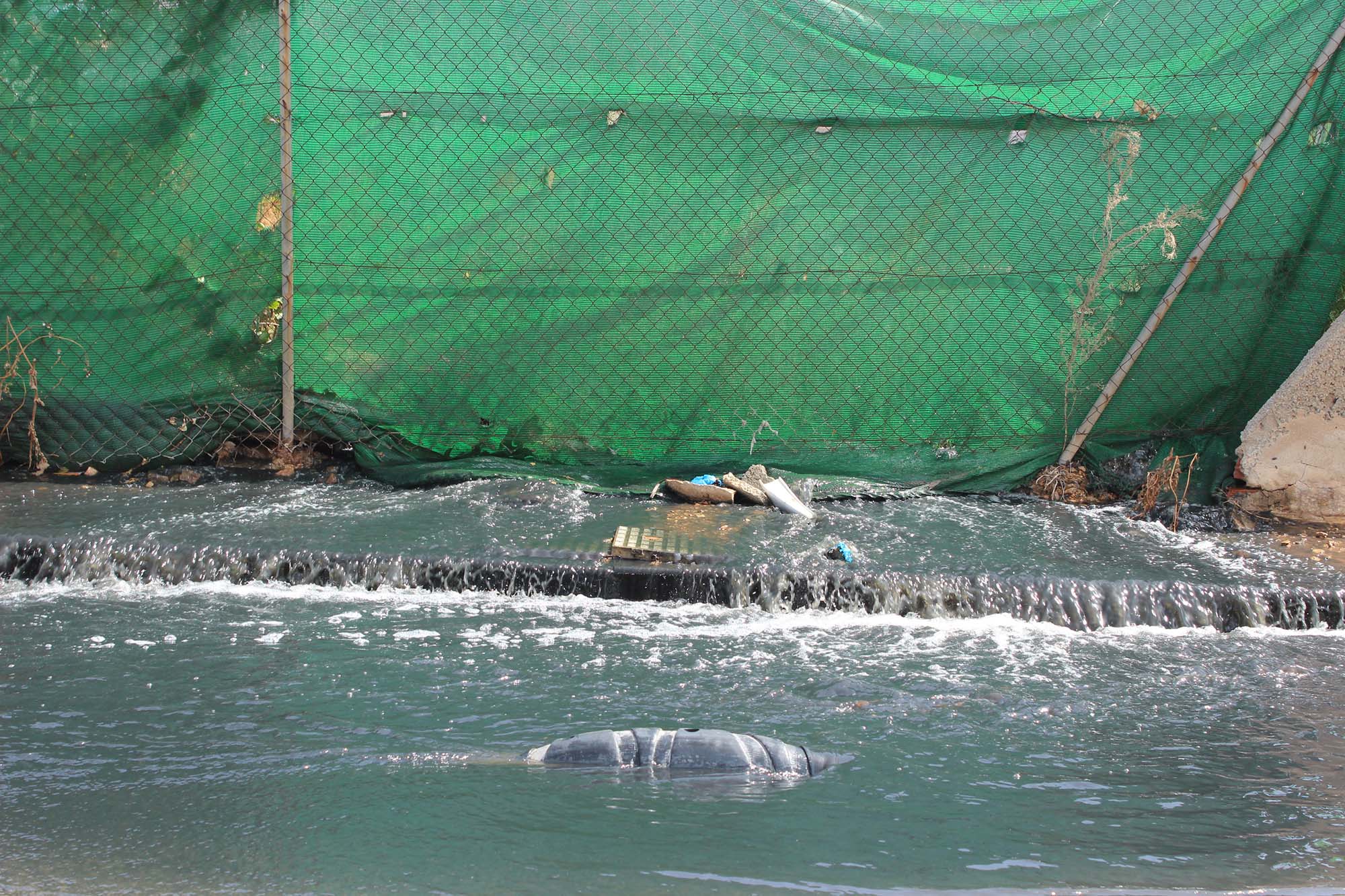 Discussions on Facebook and local WhatsApp groups continued long into Thursday night with many posts agreeing on one basic point; that the people of the Orihuela Costa are paying Premier League Taxes while receiving only lower league services. One group said that the spill only reinforces a need for segregation, with the name of Costa Campoamor, and while it seems difficult and unlikely to happen it is becoming increasingly essential, as the area continues to be blighted by a lack of essential services.