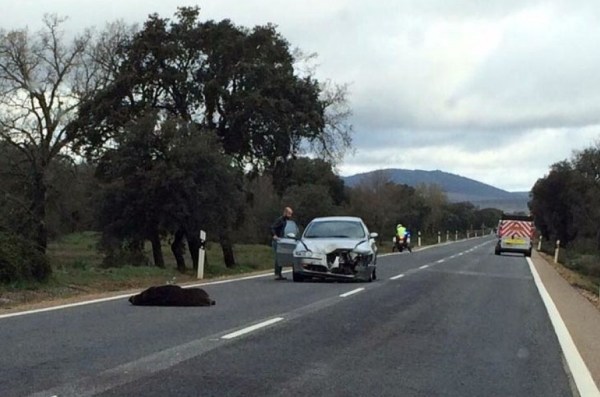 Although most drivers undergo at least the mandatory training before becoming qualified for the vehicle under their control, the same cannot be said for all road users, and one particular type are somewhat oblivious to the dangers that mixing with traffic can produce.

Animals are capable of wandering freely onto the roads, and can be extremely hazardous if they come into contact with vehicles. For drivers, there are two road signs that warn of potential dangers, one which features a pictogram of a cow-like creature, this sign warns of the possible presence of domesticated or controlled animals, and the other sign, which features a deer-like animal in a state of prancing, warns of the possibility of wild animals. Of course, it is possible that animals are present on any road and at any time.

Some areas are particularly prone to problems. In the local area we have vast stretches of countryside, where roads meander through forests and over hills, where animals roam on a regular basis. In agricultural areas, we may frequently see animals crossing the carriageway, usually accompanied.

Although the drivers may be warned of the dangers, sometimes not heeding the signs however, it is harder to educate the animals. For the past year, parts of Spain have been testing a revolutionary barrier system that aims to reduce animal and traffic incidents, by creating an invisible line of protection between the vegetation and the roads. Invisible to the eye, the barrier is created by smell, and so the animals avoid the area, in theory.

In one area, which has been in the spotlight this week, the figures have shown a decrease in the number of incidents. The roads of Zamora saw 1,068 animal related road traffic incidents in 2017, which was reduced to 916 in 2018. Until the end of July this year, the figure stands at 458.

Whereas the figures have not shown the stark decrease that was hoped, it is a decline, but there is a concurrent rising problem. Although the number of incidents involving wildlife has dropped, the number of incidents involving domestic animals, such as dogs, cats, sheep and cows, has actually increased. In 2017 the figure was 106, rising to 122 in 2018, and so far this year there has been 57 incidents.

The conclusion from the data is that although planners are trying to do what they can through innovations such as the barriers, the responsibility is still in the hands of the driver. Therefore, for many of the roads where incidents have occurred, the maximum permitted speed limit is also being reduced, and the number of warning signs increased.

The barriers are being tested in other areas, having to be replaced every three months, and it is hoped that the combination of factors will help to reduce the figures further. However, it is also worth remembering that animals may be around at any time and place and that the best drivers always drive in such a manner that will allow the vehicle to stop well within the distance they can see to be clear.