Maritime Rescue, the Civil Guard, Red Cross and the National Police were mobilised overnight as the province registered a wave of five boats in less than 24 hours, carrying at least 47 immigrants, all of whom have now been rescued and detained for violation of the Immigration Law.

Following the four boats that arrived on the coast of the Vega Baja yesterday a fifth arrived at approximately 7am this morning, at the Cabo de las Huertas, Alicante, where nine people were arrested.

The current alert will ensure that the Maritime Rescue, Civil Guard, National Police and Red Cross all remain on high alert with the possibility of further boats arriving because of the calm state of the sea.

Three of the boats were intercepted on Monday carrying a total of 32 immigrants about 20 miles from Torrevieja, 35 from Alicante and 18 miles from Pilar de la Horadada.

Salvamar Mirfak of Maritime Rescue and a patrol of the Maritime Service of the Civil Guard carried out the first rescue of the immigrants, who were transferred late in the afternoon to the port of Torrevieja, where they were treated by the Red Cross before being taken to National Police shelters.

Later that day a boat arrived in Cala Cornuda, next to the Torrevejense beach of Los Locos, and a dozen immigrants ran off into the town, of which six were subsequently arrested. 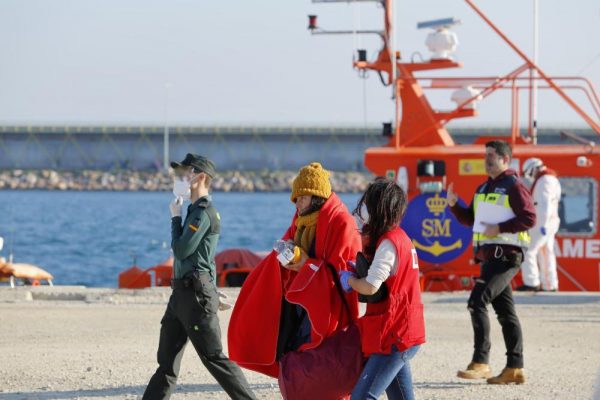 These boats were then joined by one that arrived on Sunday at Carabassí beach in Elche. Two of the occupants of this patera were arrested Sunday afternoon after they were found hidden among the trees. These two immigrants, 26 and 37 years old, are of Algerian nationality and were treated in police units by a Red Cross humanitarian aid team. Although at first there was talk of the landing of 20 or 25 people, the National Police yesterday reduced the figure to about a dozen, including a man and a woman wearing a wetsuit.

The patrol of the Maritime Service of the Civil Guard also joined the operation and a helicopter of the Guardia Civil located a patera 20 miles from Torrevieja. 10 immigrants were on board. A third boat was then located with 16 people, including a pregnant woman and children, 18 miles from Pilar de la Horadada.

The Red Cross attended to all of the immigrants, including a three-month pregnant woman and nine young people who claim to be minors, although it seems that only two of them are under 18 years of age.

The alarm was again raised shortly before seven o’clock this morning when Salvamar Mirfak sighted a boat that was heading towards the Cabo de las Huertas. Agents were immediately mobilised and intercepted the immigrants making nine arrests.