One of the nation’s most beloved entertainers passed away peacefully in the early hours of today at his cherished home in Blackpool.

Joe died in his bedroom, laying in the arms of his devoted husband of 21 years Jamie, with his rosary beads clutched tight to his chest.

Longthorne’s incredible career in showbiz began with appearances on TV’s Junior Showtime. His big break came in 1981 when he was a finalist on London Weekend Television’s iconic Search for a Star.

This led to appearances at the London Palladium with Bob Hope and The Talk of the Town. A short time later, Joe received the Variety Club of Britain award as Most Promising Artiste of the Year.

Television specials in the UK and USA soon followed, and the rest, as they say is history.

A SPECIAL greatest hits performance was scheduled to celebrate more than 50 years in the music business for one of the industry’s most dynamic performers with a slot at Venue Cymru later this month. 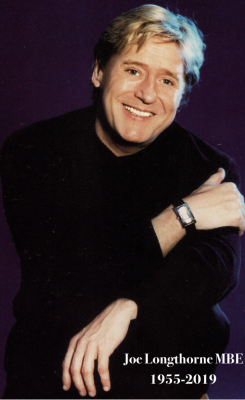 Famed for an endless repertoire of the voices of the world’s top singers Joe commanding voice has seen a succession of gold and platinum albums that have sold in the region of 10 million records.

Declared “The finest talent. He is up there at the top” by legendary comedian Bob Hope, Longthorne was last on stage just a few days ago in Peterborough last night where fans tweeted “Great to see and hear Joe again although a little frail. Sending love and healing vibes your way.”

Joe had planned to perform at several gigs in the next few days, including an appearance at Viva Blackpool on Sunday 4 August.

Having battled cancer throughout his life, including blood cancer in 1987 which ended with a diagnosis of chronic lymphatic lymphoma two years later, the singer continued to work throughout his illness, but had to undergo a bone marrow transplant in 2005 when the lymphoma degenerated into leukaemia.

He was then diagnosed with throat cancer in 2014 but still vowed to continue performing.

A regular over many years at the Benidorm Palace, Joe has made many friends on the Costas over his many years.

He leaves behind sister Ann and brother John. Our deepest sympathies and condolences go out to Jamie and all the family at this sad time.