Another 2 rescued equines arrived at Easy Horse Care Rescue Centre last week but as always there were many more calls for help regarding such animals. What the general public don’t seem to realise is that EHCRC already has nearly 120 rescued horses, ponies and donkeys. It is logistically impossible for them to take every animal that people ask them to.

They have to focus their attention on those animals most in need and in conjunction with the Police and Guardia Civil. Hence reporting cases of abuse or abandonment ie making a ‘denuncia’ to the Guardia Civil/Police is paramount (details of how to do this can be found on EHCRC website below). EHCRC functions without any governmental funding and relies on donations, volunteers, their Charity Shops and the 24/7 unrelenting drive of the Co-Founders, Sue and Rod Weeding.

The first of these rescues is a darling little pony. EHCRC received a phone call from U.R.M.A., the Policia Local in Callosa de Segura – they had received an anonymous call to say there was a little pony in an appalling state. They responded immediately and could see at a glance that this poor animal needed help there and then! So they phoned EHCRC and as always Rod dropped everything to go there straight away. The Police helped Rod load her onto the trailer and they went directly to the Station to get the necessary paperwork to give to Rod to allow him to transport her legally to their Centre. 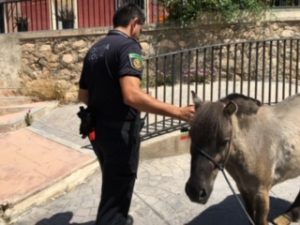 She is the sweetest little thing, about 9 years old, she is covered in sores with dreadful skin problems, she is very malnourished and her feet are in an awful state. Dorothea, their equine vet, has given her a full check up and she is receiving the care she so justly deserves. The Police want Dorothea’s report as they are determined to take this case to Court. Another step forward in animal welfare.

The second rescue is an adorable donkey. The Centre received a call from Protectora Pels Pèls Crevillent, an animal organisation from Crevillente in the Alicante Province. The owners of a property had called them in the morning after they had found a donkey, abandoned tied to the fence of their house, in very poor condition with a huge lump under her tummy.

Pels Pèls don’t have the facilities to keep a donkey, so they asked EHCRC for help. Having advised them to report it to the authorities, they did so immediately and took care of the donkey, making sure she had shade, food and water. The Local Police contacted EHCRC and yet again Rod went immediately. The Police prepared the necessary paperwork to transport the animal so Rod could legally collect her and bring her to the rescue centre.

Their vet Dorothea determined that the huge lump she had was a hernia: basically, the intestines had broken through a weakened area in the abdominal wall. As there was a risk of rupture that could cause very serious problems, she needed to have surgery as soon as possible. The Hospital Veterinario San Vicente in Alicante, agreed to do the operation and we are delighted to report that the surgery was successful and she is now recovering well, having had some much need dental work done at the same time. 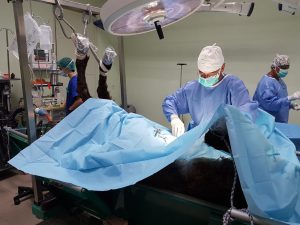 A special thanks to those who donated towards her operation. She will leave the hospital having lost that horrible hernia and some rotten teeth but having gained a name-Luisa, after one of the vets who treated her at the Hospital, Maria Luisa and whose saints day is 21 June Saint Luis’ which is also the day this donkey was rescued!

Many thanks to the Policia Local in Callosa de Segura and Crevillente for their prompt action. Like many other authorities in the area, they are so grateful for the services EHCRC provides as without them they would not be able to get out there and be proactive in the fight against animal cruelty as so few organisations have the facilities to keep equines. The animals would just have nowhere to go. However funding is an issue for them too. The fight to improve animal welfare can only continue with public support and that of the Authorities. A huge thank you as well to all the other people involved in the rescue of these animals

As always EHCRC would like to thank all their supporters, and to donate or find out more check out their website www.easyhorsecare.net

You can visit our two latest rescues and all the other residence on our next open day 7th July  1 – 4 pm.

More info on www.easyhorsecare.net or find us on facebook.