Although it´s still only July, Thader Rojales have dusted off the cobwebs, having got the first of a number of friendlies under their belt.  On first examination, an opening fixture against a youth team side, should be a comfortable stroll in the park.  But, when that team is a feeder club of the mighty Atletico Madrid, then reality sets in.  Celtic Elche are classed as a mens youth team, who last season secured promotion to the national youth league. 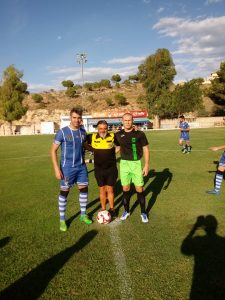 Thader played the majority of their new signings in the 2nd half, preferring to give last seasons players a starting role.  How new manager Jon Ortega´s men went a goal down in the 1st half, is difficult to fathom out!  A goalkeeping bloomer was responsible for the visitors taking the lead, but in all honesty, had it not been for poor finishing, Thader could have comfortably been in the lead by half time.

Veteran Rafa Gomez, making his debut, shone in midfield, and along with other replacements, made a big difference.  Midway through the 2nd period, a rare attack allowed Celtic Elche the opportunity to double their lead, which they gratefully accepted.  On this showing, a prolific goal scorer must be high on Ortega´s shopping list, for although numerous chances were created, the overall shooting was pretty poor.

Next Friday 2 August, Thader are again at home inside Moi Gomez stadium, but with a slightly later ko time of 8.30pm.  As with a lot of friendly matches, ko times can change at short notice, so it is highly recommended to check on the C.D Thader 19/20 facebook page, before travelling.  It was a nice touch to allow fans in for free last Saturday, as there was a decent crowd in evidence.

Kelme CF are the next visiting team.  They are also a youth side, being a feeder club to La Liga side Villarreal.