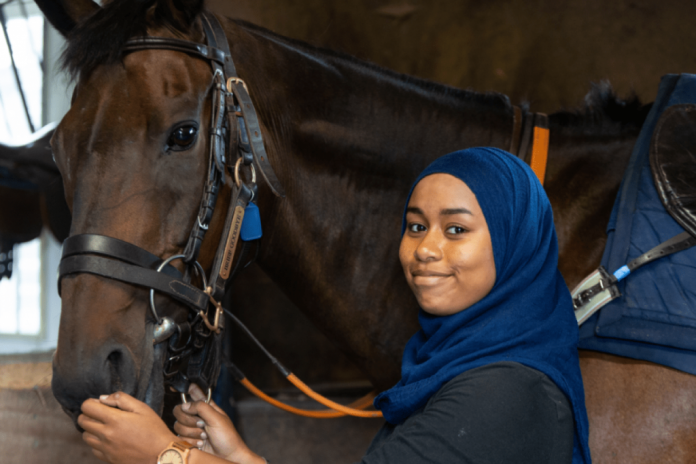 “Khadijah has worked so hard since being based at Newmarket, riding out every day, and has built a close bond with Haverland, who adores her. She is so determined and focused,” said Fellowes.

Khadijah, who has just finished her A Levels and set to study mechanical engineering at University in September, learnt to ride at the Charity Ebony Horse Club in Brixton. “I only started riding racehorses in April and have put in a lot of hard work, riding out two or three times a day, and being in the gym on the Equicisers,” said Khadijah.

“I feel like I have learnt the ropes and It will be incredible to line up against the likes of Victoria Pendleton,” said Khadijah.

“It’s crazy to think of my journey over the last couple of months – but a big part of my life has been proving people wrong,” said Khadijah.

“I am thrilled that I am part of shift in social understanding, of what women can achieve, and what they can be good at.

“There’s quite a stereotype around Muslim girls and them ‘not being able to follow their sporting passions and dreams’.

“I want to be a role model to anyone who wants to do something that they wouldn’t initially believe was in their comfort zone and allow people to follow their aspirations and dreams,” said Khadijah, featured in the documentary, Riding a Dream.

The prestigious Group 1 Qatar Nassau Stakes is the highlight of the eight-race card, worth £600,000, at Glorious Goodwood on August 1.