Three beaches in Costa Blanca which are particularly popular with British tourists have been re-opened, days after a pair of mystery fish attack spread panic in the region. Although press speculation has seen everything up to sharks and Portuguese Man O’War jellyfish labeled as the culprits, no individual species of fish has been identified as being behind the attack. Officials investigating the attack found nothing unusual in the water beyond the normal marine life.

Costa Blanca has always been extremely popular with British tourists, and with summer holiday season underway in the UK, local tourism officials had been concerned that scare stories about the water may put off visitors. Although there were only two incidents, and nobody was left with severe injuries, the attacks were still reported around the world, and presented as if they were a significant health and safety issue.

Had the incidents involved adult swimmers, it’s likely the reporting wouldn’t have been so extensive. Unfortunately in this instance, it was children who were the victims of unseen assailants below the waves. The first child bitten was a seven-year-old, who suffered bites to his foot so severe that he was rushed to a hospital for treatment. At first, this appeared to be an isolated incident, but then a second instance of a ten-year-old being bitten while in the water near Alicante prompted action. Police stepped in and closed El Rebollo, as well as La Marina and El Pinet, forcing hundreds of sun-seekers to abandon their plans. It’s not known whether the children involved in the incidents were British.

Although there are incidents of swimmers and bathers being stung or bitten by sea life every year, this summer appears to have brought an unusually high number of attacks. While nobody can say for sure whether jellyfish were responsible for this most recent pair of incidents, they were confirmed as being responsible for seven attacks which happened in June. 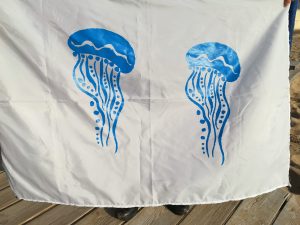 Those incidents also resulted in three beaches being closed, with two Portuguese Men O’War spotted in the water. Five of the people affected had to go to a hospital for treatment, leading to Britain’s Daily Express newspaper issuing a ‘holiday alert’ for people planning to visit Benidorm and the surrounding areas.

Tourism, as everybody knows, is vital to the local economy of Benidorm and Costa Blanca in general, with many British ex-pats having relocated to the area permanently. The beaches within the area are considered to be idyllic, and consistent with the view of beach holidays that Brits have from picture postcards, and from seeing in the backdrop of popular mobile slots UK like ‘Here Comes Summer.’

Although Brits are happy to gamble their money by playing slots which have a summer theme, they’re less likely to gamble with their health by visiting beaches they believe to be dangerous. The chances of being stung by anything in the water may be lower than the chances of winning the jackpot when playing slots, but beating the odds by winning at slots is a pleasurable experience. Beating the odds by being stung is not. It is to be hoped that now the beaches have been confirmed as safe, tourists are still happy to follow through on their holiday plans.

Is It Safe To Go Into The Water?

As local authorities cannot realistically be expected to prevent fish from swimming through the sea, any tourists who do decide to go for a dip are advised to exercise caution, and to stay close to areas where there are plenty of other swimmers in the water. If they suspect that they’ve been bitten or stung, the best advice is to seek treatment immediately.

The sting of a jellyfish is poisonous, and although it’s rare for one to be fatal, the chances are increased if the person who suffers the attack has a pre-existing health condition. The stings are also extremely painful, and can occasionally result in short-term paralysis.

At present, the beaches are open under a ‘yellow flag,’ which is usually reserved for times when the tide is potentially dangerous, and indicates that swimmers should use extreme caution and enter the water at their own risk. It’s understood that enhanced lifeguard and police patrols will remain in the area temporarily until a few days pass without further incidents.

As the perpetrator of the more recent attacks – which is believed to have been the same fish – has not yet been identified, it’s possible that’s still in the area. Officials have however been quick to assure locals and visitors that it’s not a shark – although the bite marks on the younger child’s feet were painful, they were not large or severe enough to have been caused by a shark.

Although there are reported sightings of sharks in and around Benidorm in post years, there hasn’t been a confirmed shark attack for many years. Sharks do sometimes visit the area though, with an 8ft shark spotted and photographed passing through the water close to tourists as recently as 2017. On that occasion, the shark showed no interest in biting anybody, left a quickly as it had arrived without causing harm.

There has only been one sighting of a great white shark – the kind made famous in the movie ‘Jaws’ – close to Spain in the past thirty years, and that was close to Majorca. Marine experts have long resented the impact that the horror movie had on the public perception of sharks; in practice, they generally only attack when provoked, and are killed by humans far more than vice versa.

There are, of course, many other things to see and do in Costa Blanca than swim, and so if you have concerns about going into the water, there’s no reason to do so. It’s still fine to relax on the beach, and most of the local hotels have swimming pools.

Perhaps, for the short term, it would be better to take a good book to the beach and pass an afternoon in a deckchair or build a sandcastle. The beaches are lovely, but there are plenty more reasons why tourists come to Benidorm for a good time!

Vocabulary of the Virus – David Aitken