Local Police arrested two men on Sunday following the theft of two high-end vehicles valued at 220,000 euros from the Marina in Cabo Roig. The men are said to be of Belgian and Albanian nationality

The thefts occurred on Sunday afternoon when a man looked on as two people stole his Maserati, a high-end car valued at 220,000 euros, which was parked in the Port of Cabo Roig. He quickly notified the port authorities, who in turn gave notice to the Local Police. It was also discovered that they had taken a Porsche at the same time. 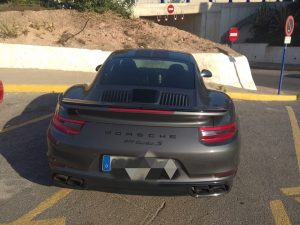 A nearby police patrol saw the two high-end vehicles on the N-332, but after giving chase the two sportscars accelerated and lost their police pursuers.

Given this fact, the other patrol decided to completely cut off the traffic of the N332, leaving the two vehicles immobilized and proceeding to arrest the drivers who opposed great resistance.

A second patrol was notified further along the N-332 which immediately closed the road, bringing the two vehicles to a halt at which point the two drivers were arrested despite offering some resistance.

The detainees, an Albanian and a Belgian, are said to be part of an organised ring that steals high end vehicles to order. Both are now in police custody awaiting an appearance before the courts.