Tuesday 9 July 2019 was a very special day for local veteran, Joe Billet, resident of Quesada and member of the Royal Air Force Association, Costa Blanca.  Joe, a young man of 17 years, was one of the heroes of the D-Day invasion forces on Gold Beach, Normandy.  For this and his subsequent wartime service, Joe was awarded the Legion d´Honneur and made a Chevalier of the order. 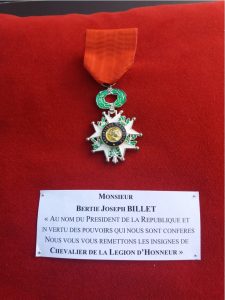 The award ceremony took place at the French Lycee in El Campello, with the medal presented by Colonel Xavier Toutain, the French Defence Attache from the Embassy in Madrid.

Joe was accompanied by his partner Rose Lyon and his son James.  His invited guests were Bill Laverick, President of the Royal Air Forces Association, Costa Blanca and his wife Pauline.

Colonel Toutain gave a short speech about the history and significance of the Order, created in 1802 by the Emperor Napoleon Bonaparte and followed with an account of Joe´s military service and the award of numerous campaign stars.

Joe replied with a speech of thanks, in which he expressed his love of France, emphasising the warm welcome he had always received from the people of France at D-Day remembrance ceremonies, and particularly this year in Bayeux Cathedral. 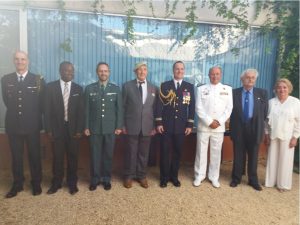 The medal was then pinned on to Joe who was congratulated by the numerous dignitaries present, both military and civilian, including officers from the Spanish Navy and the Guardia Civil.  A special guest was the French Consul from Alicante.

A champagne toast then followed, to close the ceremony.

Footnote:  Coincidentally, Pauline Laverick´s father, William Binding, was also on Gold Beach as a Royal Navy Cockswain on a landing craft ferrying troops before his landing craft was sunk by gunfire.