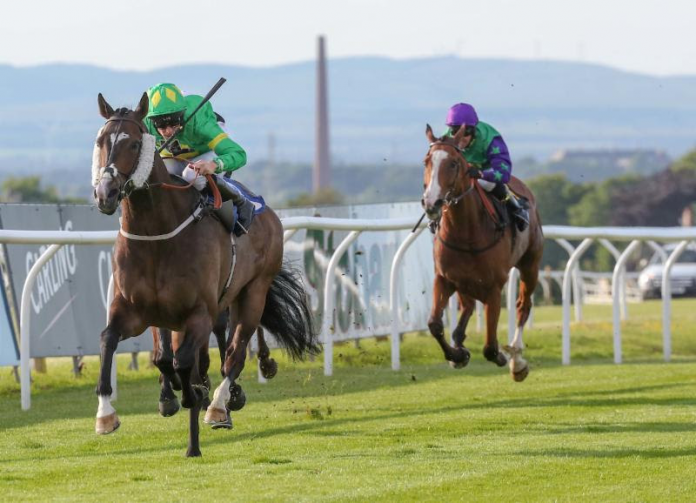 “It was the perfect race. Kelly’s Dino is a horse who stays well. I’ve been dying to step him up in trip for the last six months,” said Burke, featured in fromthehorsesmouth.tips ahead of the race.

“When we hit the front we were always going to keep going. He’s a lovely horse, who has had two or three major injuries, and that’s why he hasn’t had that many miles on the clock,” said Burke.

Kelly’s Dino pulled all the stops to win the £100,000 handicap, on only his second start, since having a wind operation.

Kelly’s Dino, drawn wide of the 17 runners that went to post, won by a length from Lucius Tiberius, with Epaulement, third and Indianapolis, fourth.

“From the draw, we were always going to try to keep it simple. He usually jumps quick, and thankfully he did that. I don’t think the wide draw was a bad one,” said Burke.

Looking forward, Burke said: “I’d love him to get in the Ebor. That’s the race we’re looking at.”

Kelly’s  Dino is entered in the bet365 Trophy at Newmarket this week, and Burke said: “It’s a question of whether we go for it or not.

“It’s tempting, with the prize-money that’s on offer. Kelly’s Dino is a horse who takes a quick race – he doesn’t overdo himself.”

*Kelly’s Dino was one of 14 winning selections fromthehorsesmouth.tips