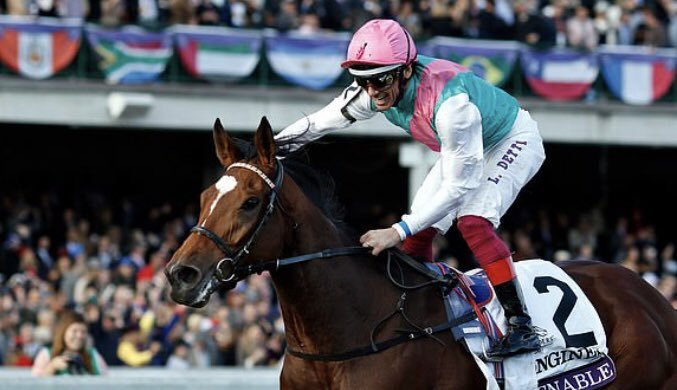 Frankie Dettori said that there’s ‘plenty more to come’ after the John Gosden trained Enable, selected by fromthehorsesmouth.tips won the Coral-Eclipse at Sandown on Saturday

“There’s plenty more to come. She’s amazing – The Queen of racing!,” said a jubilant Dettori, who returned to the winners enclosure to rapturous chants, similar to that in football!

“She is a great race filly,” said Gosden, winning his fourth Eclipse.

Dettori had 4-6 favourite Enable in behind Aidan O’Brien trained Hunting Horn, before pressing the button, asking the dual Prix de ‘Arc de Triomphe winner, to go on and win, ahead of Magical, trained by O’Brien, by three-quarters of a length. Regal Reality finished 2 lengths, back in third.

“It’s been a long preparation, she’s only started coming to herself the last two weeks. She’s come here at 85 per cent, maybe 90,” revealed Gosden.

“The last furlong I was concerned and I told Frankie ‘if she gets tired you look after her,’ ” said Gosden.

“I couldn’t be more thrilled. Frankie wanted to be where he was. She is an exceptional athlete, to come from an eight-month lay-off to win an Eclipse, is not an easy thing,” said Gosden.

“We didn’t go for racecourse gallops. We trained her at home – she’s done it all herself,” said Gosden.

“The King George next is the plan. I’m sure Magical and Enable will meet again in the King George,” said Gosden.

Enable’s schedule is the King George, York (Juddmonte International) and Longchamp (Arc): “It has always been the plan, those four races,” said Gosden.

“It went exactly how I thought it would. She quickened and put the race to bed. What a great filly,” added Dettori.

“I’m ecstatic. She is a superstar – unbelievable,” said Dettori.

“The singing from the spectators after the race was similar to that what you get in football,” said Arsenal fan Dettori.

“The recognition from the people is all about seeing one of the greats, in Enable. It’s a great honour to train such a filly,” said Gosden.

The post Enable ‘The Queen of Racing’ – Dettori appeared first on Horse Racing News and Tips.