The Cabo Roig business Community is absolutely livid at the apathy that is currently being shown by the Orihuela Government at the problems they are facing daily with the increasing number of ‘Looky Looky Men’ who are invading the Cabo Roig Strip.

And not only is the problem being ignored by the politicians but the Local Police are also turning a ‘blind eye’ at the illegal traders, often driving past them without even a glance, and certainly doing nothing to curtail their bootleg business that, with the arrival of the summer season, is growing out of all control almost day by day.

And it’s not only the trade in dodgy trainers and clothing that is causing concern as the dealing of drugs, now understood to be largely heroin, is also being conducted in the open, with the suppliers doing little to hide their transactions from the public. 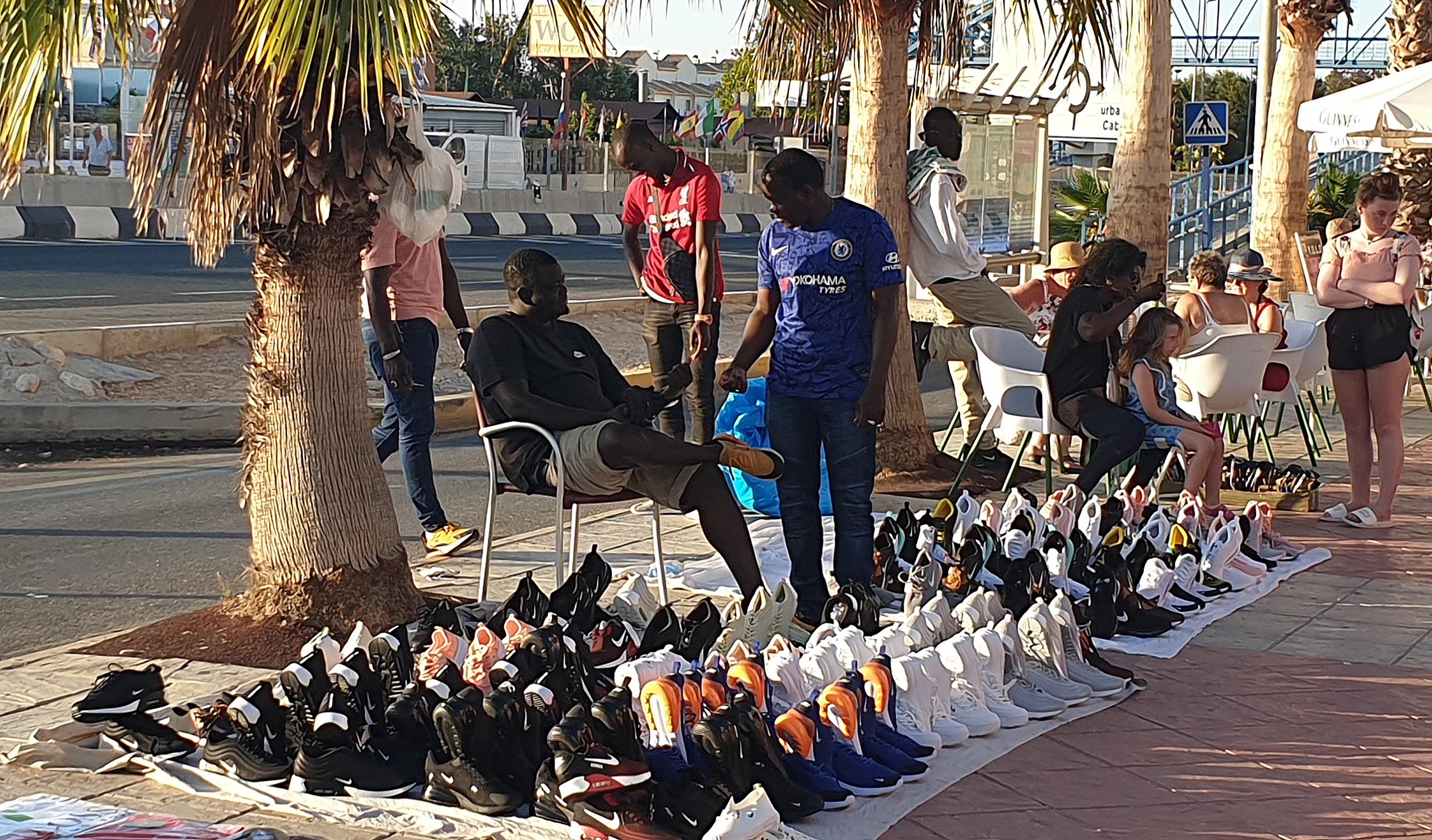 Many of the legal businesses in Cabo Roig, which, unlike the manteros, are contributing to the national economy, employing staff and paying their taxes, are concerned that if the problem is not dealt with as a matter of urgency there will be a lot of establishments closing at the end of the season and they won’t be reopening.

One businessman told the Leader “There are people who have been coming to the strip for years, but they have now stopped because it is turning into a ‘no go’ area, and yet you can travel up and down the coast, from Torrevieja to the Mar Menor, and you won’t see any illegal trading, certainly not on the scale that it occurs in Cabo Roig. It’s time to move them on now, with or without the help of the town hall.”

Another pub owner said “You can see them dealing in drugs every night. They even approach tourist couples who are simply out for a quiet meal with their young children. These people will not come back to Cabo Roig if the harassment continues.”

I personally watched on last week as two groups of ‘manteros’ fought each other outside the Europa supermarket while the Local Police watched on. They did eventually walk across but after a few quiet words the police returned to their car and drove away. There was no question, either, of the police checking identities, licenses or the legality of the goods that were being traded. They felt that a short discussion was enough, which is exactly the reason why the problems have now grown out of total control, because both the politicians and the police are shirking their responsibilities.

There was a similar incident later in the evening with approximately 20 of the ‘looky looky men’ hiding at the side of the Chinese Emporium, adjacent to the Queen Victoria pub, from where Chinese staff act as lookouts for the illegal traders. The Local Police simply walked across and had a chat with them, with no apparent action taken.

As I walked along the front of Cabo Roig strip, later that evening, I counted 53 manteros trading off blankets. These of course are in addition to the many who walk around the area with their boxes of fake sunglasses, perfumes and hats. How much longer, we wonder, will the authorities allow this to go on? 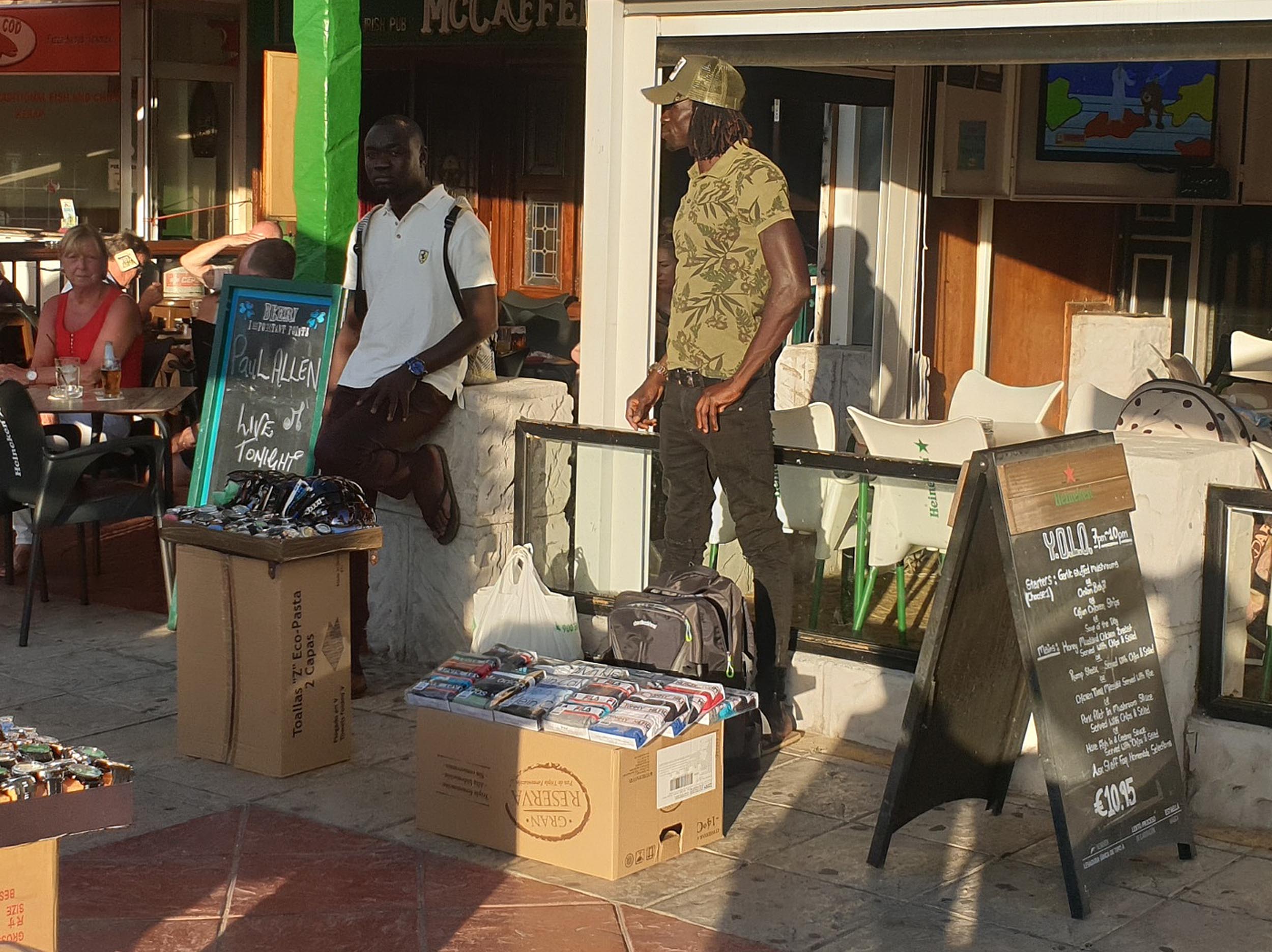 At the last meeting of the Cabo Roig Strip Association local businessmen agreed that the presence of the manteros, their drugs and their fake goods, is their number one problem, and have demanded that the President of the organisation “conveys their distress, as they religiously pay their taxes, whilst the authorities continue to turn a blind eye at the activities of illegal traders.

One businessman said that all bars and restaurants should refuse the illegal traders entry onto their enclosures and forecourts, although when this was done 12 months ago it was noted that a number of owners subsequently reported mysterious damage to their establishments, broken windows and smashed furniture, shortly afterwards, but it was agreed that unless all businesses stand together the situation will deteriorate even further.

What cannot be tolerated is the dealing in drugs that is now prevalent in the area and the aggression that many of the manteros show toward the public who refuse to buy their wares. 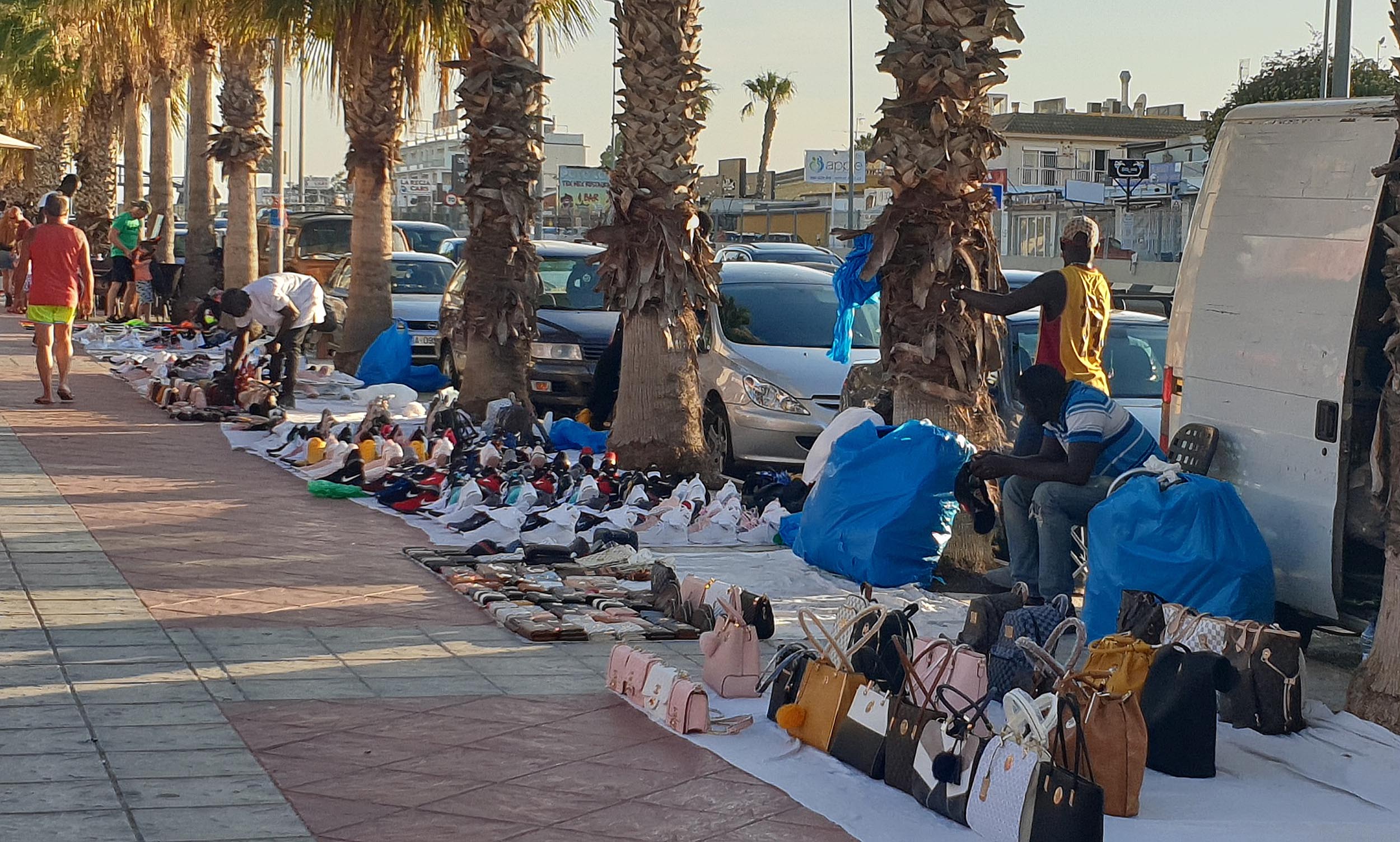 Having spent many years building the area into what it is today the business owners were urged not to let the manteros walk in and take it all away. “We must fight our corner with the Ayuntamiento and the Police to take back the Cano Roig Strip”, said one business owner. “Let’s not waste any more time talking about it. Let’s get it done.”