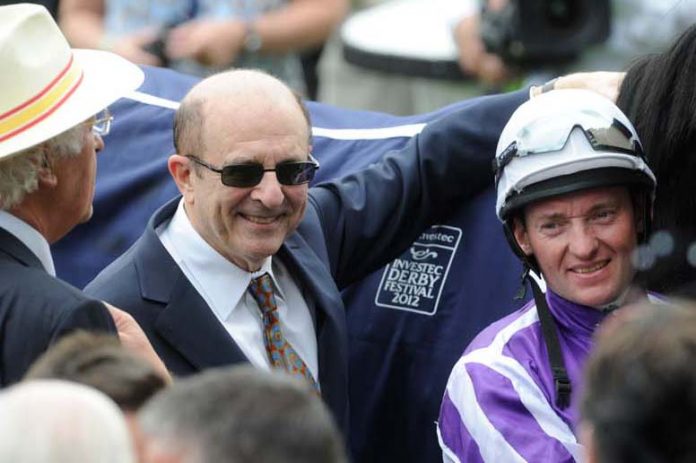 MICHAEL Tabor and his wife Doreen are hoping that they can aid trainer Jeremy Noseda’s retirement from racing at Royal Ascot’s 2019 June meeting with a winning bow.

“I am thrilled that Michael Tabor and Charles Fox have asked me to prepare Cenotaph and Bomb Proof for Royal Ascot,” said Noseda.

“It’s lovely that they want me to train their horses for the meeting – both Michael and Charles are long-standing owners of mine,” said Newmarket based Noseda.

Noseda saddles Bomb Proof and Cenotaph, the former winning on his debut at York in May.

Bomb Proof is entered in both the Windsor Castle and Norfolk Stakes, with a decision as to which race it will run in to be made this week.

Tabor has built up a racing empire, having come from a background of going to greyhound meetings as a teenager.

East Londoner Tabor, 77, son of a glassmaker, had an interest in taking up an apprenticeship as a hairdresser upon leaving school.

Since, Tabor has been a cut above the rest, having reportedly banked $2billion in his world of businesses, including that of the turf.

Tabor went into the world of racing by opening his own bookies business, and ventured Hendon’s greyhound stadium in north London.

Today, Tabor, who owns property in Monte Carlos and Barbados, has the top racehorses in Europe, and is amongst top world renowned owners.

Owner of Thoroughbred horses, tycoon Tabor, part of the John Magnier lead Coolmore Stud Organisation, is a partner in the Sandy Lane Hotel in Barbados.

Tabor’s betting shops empire blossomed into a multi-million pound empire, lining up over 100 shops, prior to selling them to Coral for a reported $27m.

From bookie to punter Tabor reportedly bet one hundred grand on Montjeu, of which he owned, at Ascot. It returned to the winner’s enclosure. Tabor chalked up over £2m in prizemoney with Montjeu.

Tornado Prince, Tabor’s first horse, purchased for three thousand dollars in the early seventies, bought Thunder Gulch, splashing out $400,000, that went on to win the Kentucky Derby, the Travers Stakes, and the Belmont Stakes.

At Royal Ascot, commencing on June 18, Tabor has connections with a list of entries. Gossamer Wings is entered in the King’s Stand Stakes (June 18) along with The Irish Rover, in the St James’s Palace Stakes, on the same day.

Magic Wand has an entry in the Prince of Wales Stakes on June 19, with Ferretti entered in the Royal Hunt Cup, along with Turnberry Isle.

Winner of a plethora of Classics, including the Derby, Tabor counts himself as ‘incredibly fortunate’.

Noseda will saddle seven year old Cenotaph, what is set to be his final runner, owned by Doreen Tabor, in the Wokingham Handicap.

With retirement imminent, Noseda added: “It’s a nice way to finish. I just want to do the best job I can – for them and my staff – who have been so supportive.”

The post Tabors set for Royal Ascot in bid to end Noseda’s training career on a high appeared first on Horse Racing News and Tips.