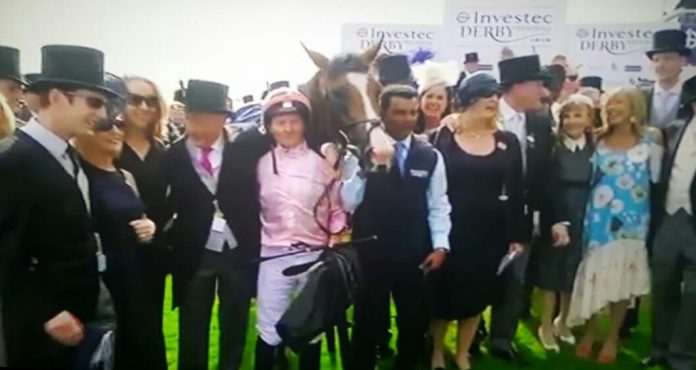 “It’s incredible and I’m so privileged to be part of the team. There’s so many people involved. I’m grateful,” said jubilant Ballydoyle ace O’Brien, 49, picking up a near £1m winner’s cheque.

Anthony Van Dyke landed the Classic at odds of 13-2 ahead of Madhmoon and Japan, with O’Brien saddling seven of the 13 runners in the mile-and-a-half race, with Broome finishing fourth – giving O’Brien three of the top four.

“These races are so competitive and so tough. We were just hoping and Seamie gave him a great ride,” added O’Brien.

“Seamie has been waiting so long. I’m delighted for him,” said O’Brien.

Heffernan, riding in his twelfth Derby, said: “I knew he would be with me when I needed him. It was a big ask – but he’s danced every dance. I’m happy.”

Favourite Sir Dragonet, and Circus Maximus, ridden by Frankie Dettori, backed down from 20-1 to 10-1, were both unplaced – to the relief of the bookies.

Telecaster was disappointing, having been well supported in the betting, leading up to the race: “He did everything right before the race – but on the day he ran a little bit flat,” rued jockey Oisin Murphy.