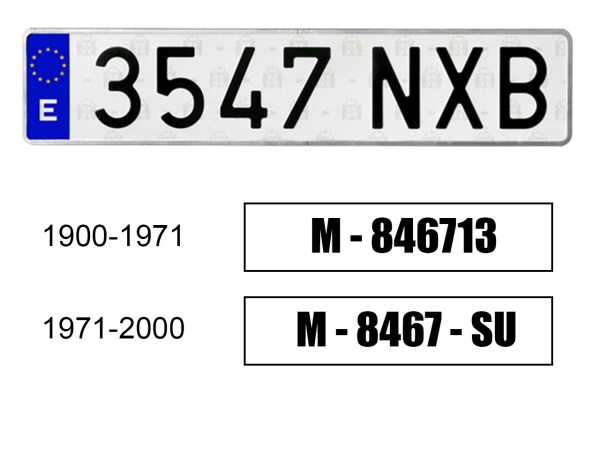 The Spanish number plate system dates back to 1900, although the concept and layout has undergone a number of transformations since then, the latest format taking over a century later in September, 2000.

Currently, the Spanish number plate is formed by the European symbol on the left hand side, in a tall band, then four numbers and three letters, which allows a total of 80 million combinations. In other words, the system is safe to continue until 2040.

The numeric sequence started at 0000 and ends at 9999, however, interestingly, the letters begin at BBB and will end at ZZZ, but will not contain any vowels, nor will the combination include the letters Ñ or Q. The reason that vowels are not included is that it avoids the creation of words, for example, BOT, COW, CAT, FBI etc, whereas Ñ and Q are omitted as the number plate system forms part of a European standard and those letters could be confused for others.

The first registration system adopted in Spain, which was active until 1971, consisted of one, two or three letters representing the province and up to six numbers without zeros. Although they are becoming less frequent, you can still see some of them on the roads.