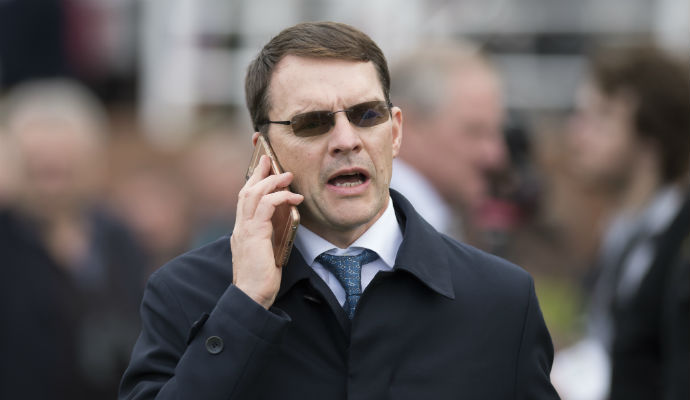 Aiden O’Brien will saddle seven of the 13 runners going to post in Saturday’s Investec Derby over 1 mile 4 furlongs at Epsom Downs.

“Every horse is bred and raised to go to the Derby,” said O’Brien, who saddles Sir Dragonet (tipped to win) Circus Maximus, Norway, Sovereign, Broome, Japan, and Anthony Van Dyke.

Derby favourite Sir Dragonet was supplemented at a cost of £85,000 having opted to run in the Derby, instead of the Prix du Jockey Club at Chantilly.

Sir Dragonet, ridden by Ryan Moore, was an eye-catching winner of the Chester Vase when  gaining an eight-length victory on the Roodee.

Telecaster, the mount of Oisin Murphy, tipped each way, is a threat in O’Brien’s stable bid to land a seventh equalling record winning Derby.

Telecaster, trained by Hughie Morrison, who ran against Bangkok at Doncaster, and gained success in the Dante Stakes, expected to stay the trip, was also supplemented at £85,000.

“Telecaster was an impressive winner of the Dante Stakes” said 23 year old Murphy, riding in his fifth Derby.

“Telecaster had a hard race at York in May – but we’ve been perfectly happy with him leading up to Epsom,” said Morrison.

Bangkok, trained by Andrew Balding, the winner of a Classic Trial at Sandown in April, is worthy of each way support at 8-1.

“Bangkok is a very well balanced horse with a wonderful pedigree – an ideal type for the race,” said Balding.

The Derby, dating back to 1780, restricted to 3 year olds, is the richest race in Britain.

*Saturday’s racing news and tips from Epsom, Musselburgh, Doncaster, Hexham, Lingfield, Stratford and Worcester will be live Online on Friday at: fromthehorsesmouth.tips