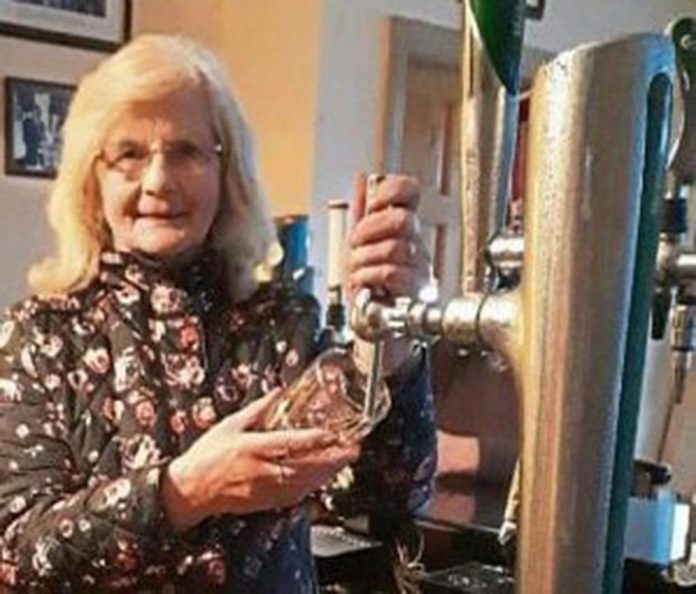 By Andrew Atkinson EXCLUSIVE AFTER three decades in racing without a winner you’d have thought owner-trainer Tom Shanahan would have pulled the reins in! But patience eventually paid off for Irishman Tom – when his six year old horse Charle Brune won TWICE – in the space of two days. “I called into the bar straight after the second race win,” said Tom, 53, who couldn’t wait to go to his local to celebrate – with Charle Brune in tow. Tom and Charle Brune nipped into the Horse and Hound Bar Lounge at Dhalla, County Tipperary, near Cashel, after winning at Tipperary. “It was a fantastic surprise to see our neighbour and customer for years, Tom Shanahan, winning at the races with his horse Charle Brune,” owner of the bar Maggie Ryan told me. “It is lovely to see someone local having such a great win,” said Maggie. Ballinure based Tom, saddled Charle Brune to wins at Wexford, gaining a 23 lengths win in a 2 mile handicap; followed by victory at Tipperary, when gaining an 8 lengths win in a 2 mile handicap, ridden both times by jockey Donagh Meyler. “I used to take Charle Brune out on hunts – to sort his head out,” Tom, Huntsman at the Premier Harriers, told me. “I arranged with Maggie Ryan at the Horse and Hounds that I was calling in on my way back from Tipperary races – for a few beers,” said Tom. “I did tell Maggie I was bringing the horse into the bar! We didn’t half have a craic – in what will be a once in a lifetime experience,” added Tom. Tom piled praise on his son Bill, credited in playing a key role in the success: “Credit has to go to Bill – the huge amount of work he’s put in is fantastic”, said Tom, who self labelled his yard a ‘Mickey Mouse’ set up. “Charle Brune has always jumped well – from what is a Mickey Mouse set up,” said Tom. Charle Brune won his two races at Wexford on May 22, at 10-1, and at Tipperary on May 23, at 9-4 favourite. Tom, who owns Spotless Drain Cleaning, cleaned up with nice punts, having won prizemoney of 14,275 euros with Charle Brune. Charle Brune carried 11st 10lb in the Tipperary race, racing close up, disputing the lead, going on to beat I’m Serious in an 18 runners field. At Wexford Charle Brune carried 11st 4lb, tracking the leader, going clear four out, easing in the closing stages, beating Soul Season. “It will never happen again. It won’t repeat itself. And you have to celebrate the moment,” said Tom, set to sell Charle Brune in the sales. “We wish Tom all the best – and thank him for his support. A good night was had by all,” added Maggie, owner of the pub for 22 years. The post Jubilant ‘Mickey Mouse’ trainer Tom  takes horse Charle Brune to bar – celebrating once in a lifetime wins appeared first on Horse Racing News and Tips.