The poor overnight performance of the PSOE has seen it lose influence in many municipalities where it has governed as the major partner of a coalition although it has maintained a dozen councils.

However the Popular Party (PP) has regained some of the power it lost in the elections four years ago and will now be able to regain control in many areas where it is expected to forge a relationship with Ciudadanos and in Torrevieja, Pilar de la Horadada and Cox where it gained an overall majority. 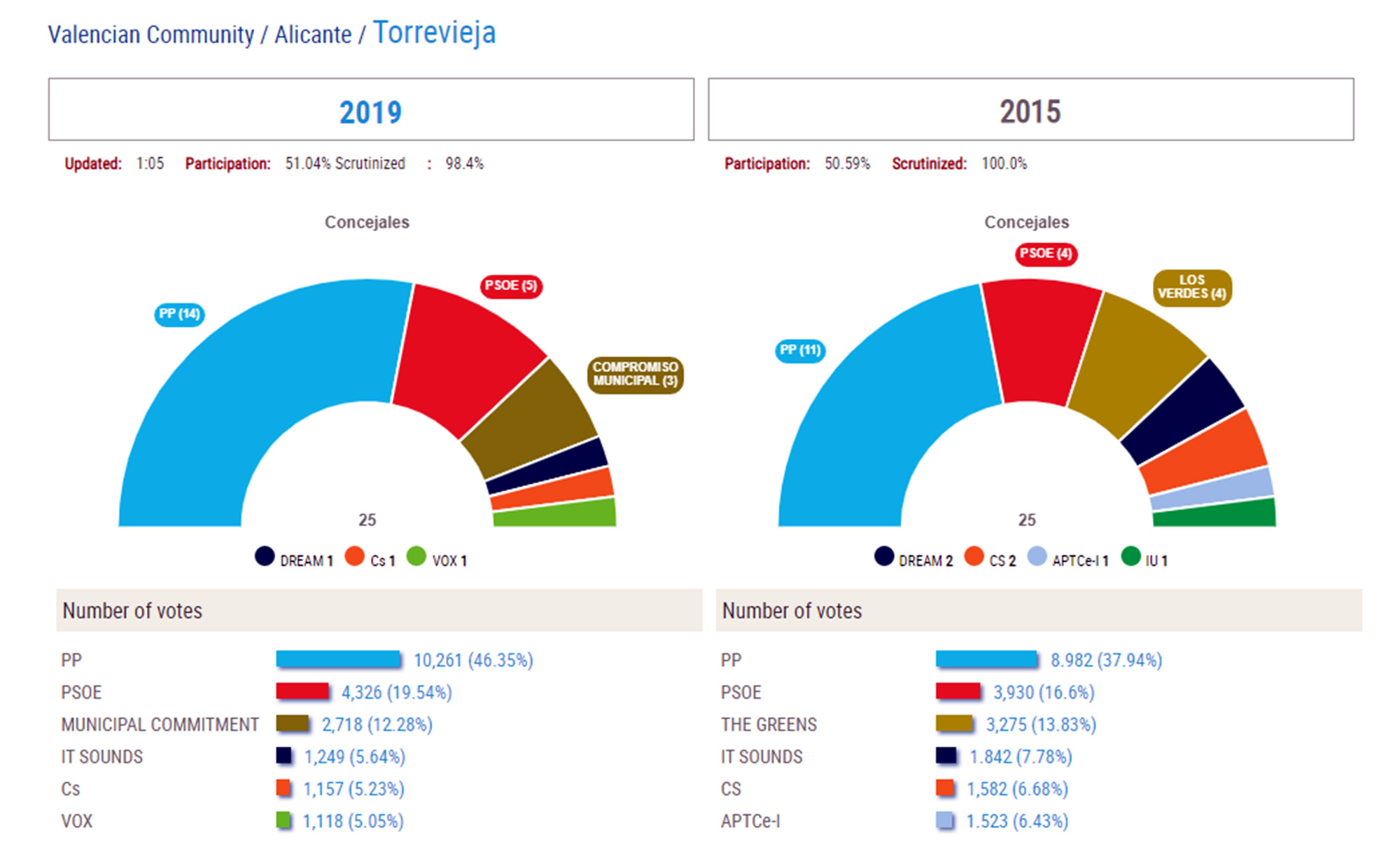 The PP achieved 14 councillors in Torrevieja to give it the overall majority, an increase of three from 2015, while Vox, with one councillor achieves a seat on the municipal council for the first time.

The PSOE has increased from 4 to 5 councillors, Compromís has three councillors. Sueña pierde loses a councillor and now has just one seat along with Ciudadanos.

The PP also regained control in Pilar de la Horadada where the retirement of the PSOE’s long term mayor, Ignacia Ramos, saw the party lose votes and the overall majority to the PP with businessman, and President of the local football club, José María Pérez Sánchez, taking eleven of the twenty-one council seats, an increase of four from 2015. The PSOE, with new leader Pilar Samper, lost two seats, picking up just seven, while the C’s won just two.

ANOTHER COALITION FOR ORIHUELA 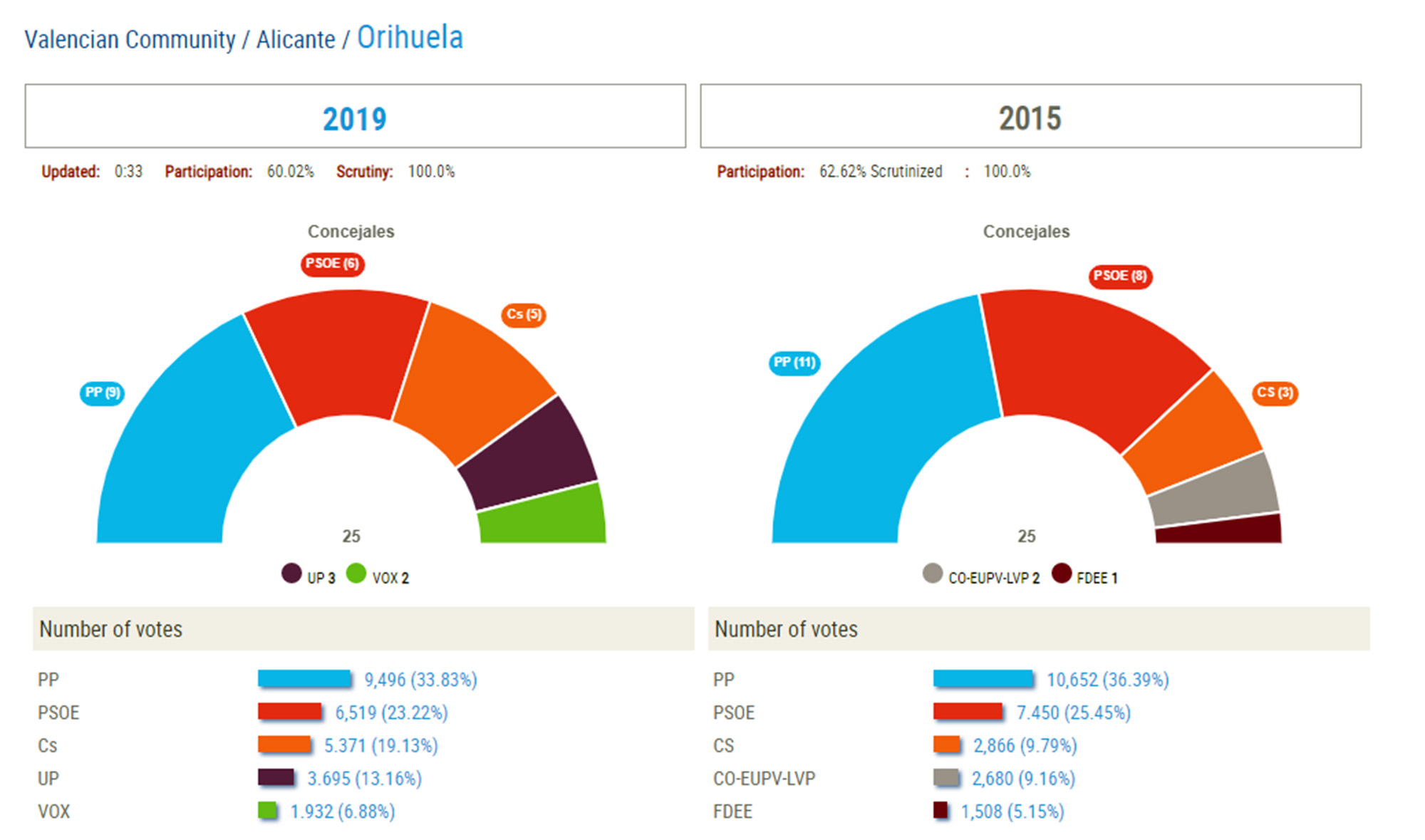 The PP also won the most seats in Orihuela but will once again have to rely on the support of Ciudadanos if they are to stay in power. However the party lost two councillors and 1,183 votes.

Mayor Bascuñana has valued the results positively and in his first statement he said that “we won the elections in adverse conditions, against many elements, both external and internal,” this in reference to the internal disputes within the PP itself. However he will need to rely on another party if he is to remain in power.

Questioned about a possible pact with Ciudadanos, Bascuñana said that “from Monday we will establish contacts and follow on from this new scenario that the people of Orihuela have given us”.

The biggest gains in Orihuela were for Ciudadanos, with José Aix at the helm, which increased its share from three to five councillors and will now have the key to the Orihuela government. The party celebrated the results, knowing that they will be the most important element when it comes to setting up the new Government in Orihuela.

José Aix said he was very happy to double the number of votes with respect to the last elections. “We are very excited and eager to start working to change Orihuela,” said Aix after learning the results.

The PSOE loses two councillors and continues as the second political force in the Oriolan City Council. Cambiemos Orihuela, along with Podemos and the Costa CLARO party, won three seats

Vox sneaks into the City Hall with two councilors. The candidacy led by José Manuel García Escolano has achieved 6.85% of the votes.

In general, the electorate has punished the left-wing pacts although the Socialists have maintained and even expanded their positions in Guardamar and San Miguel de Salinas although they will have to reach agreements with other formations if they are to gain control of the councils.

In Callosa de Segura the PP gained eight of the seventeen councillors with everything now indicating that it will govern in minority or formalise a pact with Ciudadanos who have two councillors. The PSOE has maintained its five councillors while the EU loses one, reducing it to two.

In Rojales the PSOE, led by Antonio Pérez, has returned an absolute majority but with one councillor less than the last term. The Socialists have obtained nine councillors while Pader and the C’s have three each and the PP two.

In Guardamar del Segura, the PSOE led by José Luis Sáez will rule with an absolute majority, increasing its share from seven to 11 councillors while the PP have lost four.

In Albatera also the PP regains its absolute majority with nine councillors against the six of the PSOE, one of Vox and one of Cs. In Catral, the Popular Party led by Joaquín Lucas has won six councillors, one more than in 2015 but it is likely to continue in the opposition if Alternative for Catral, which lost one councillor, reducing it from 5 to 4 and the PSOE, which achieved three councillors, decide to renew their coalition with which they have governed for the last four years.

In San Fulgencio the winners were the Socialist Party, which has jumped from two to six councillors with the list led by José Sampere. Of course, their command is not guaranteed. PIPN with three councillors, has the key to the government. Their votes will be decisive to allow a government in coalition with the PSOE.

In San Miguel de Salinas the PP has ceased to be the most voted force after 16 years in the government. The popular pass from six to four councilors and the PSOE rises from three to six mayors. Thus, the socialists could govern in minority or agree with the mayor of Adelante SM or the US, since it seems improbable an agreement with the councilor of Cs.

In Benejúzar, the mayor Antonio Bernabé (PP) has lost his absolute majority gaining just six councillors, a loss of one from the last mandate. The range of possibilities to form a government is wide open given that the PP could govern in minority or agree with Cs, which has two councillors. Another possibility is that the Albert Rivera could rule with the PSOE (five councillors) and take away the power of a mayor who has spent 12 years in office.