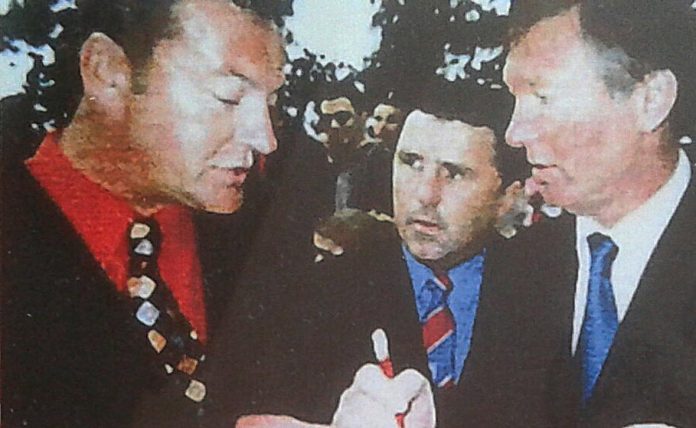 SIR Alex Ferguson entered his 21st year as a racehorse owner going into 2019 – one of the Sport of King’s most successful persons – having placed a ‘tanner each-way’ bet, that lured him into racing decades ago.

“It’s always good to have a day out at the races,” Ferguson told me.

Former Manchester United gaffer ‘Fergie’ is often at Haydock Park, his local track, where he took his United stars for a ‘day at the races’.

Ferguson, 77, who lives in Wilmslow, Cheshire, with his wife Cathy, has horses in both Flat and NH racing.

Horses, including Clan Does Obeaux, trained by Paul Nicholls, whom Ferguson admires for his achievements in racing.

Chaser Clan Des Obeaux, winner of the King George VI Chase at Kempton, being one stable star, co-owned by Ferguson.

Fergie, who also plays the piano to relax, saw racing as something to get away from the pressures of once managing one of the world’s top football clubs, that spanned approaching nigh on three decades.

Speaking about the Cheltenham Festival, where Ferguson, who underwent life-saving brain surgery in 2018, had Give Me A Copper running in 2019, said: “Cheltenham Festival is ‘the’ festival of National Hunt racing.”

Ferguson began his love of the turf in 1998, when purchashing Queensland Star for under £20,000 – named after a ship that his dad had worked on at Govan shipyards in Scotland.

Ferguson’s Midas touch, from his tremendous achievements at United, have been carried forward into racing, with a dream of winning the Aintree Grand National.

“It would be great to win the Grand National,” said Ferguson.

Ferguson, co-owner of Rock Of Gibraltar, tasted success in winning the Classic 2,000 Guineas at Newmarket in 2002.

Rock Of Gibraltar won a record-breaking seven Group One races.

Ferguson was thwarted in having a runner in the 2013 Epsom Derby in Telescope, part-owned, withdrawn by trainer Sir Michael Stoute.

Ferguson reigned at Old Trafford for 27 seasons, in charge of over 800 Premier League games, and in the manager’s hot seat in 1,400 games in all competitions.

Ferguson, who has some nice horses in training, deems that of a trainer a similar ilk, to that of being in football management, deemed a ‘sacrifice and hard work’.

Ironically I recall going to see one of Fergie’s horses, Shinbone Alley, trained by now retired Jack Berry at his Cockerham Stables – being looked after by a stable hand – a Manchester City fan!

The post From a ‘tanner each-way’ bet – to joining the Sport of Kings – Sir Alex Ferguson appeared first on Horse Racing Tips and News.