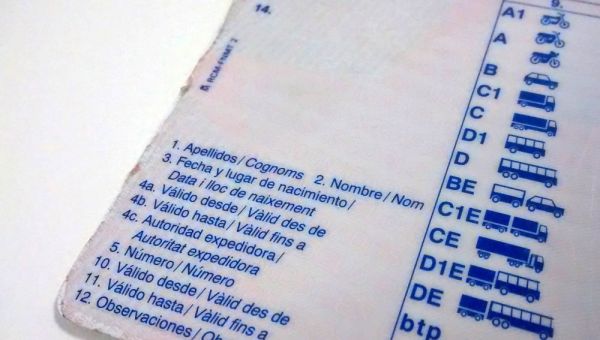 From 1 July, 2019, category B (private car) licence holders will be able to drive more vehicles than before, thanks to a change in the law.

The Directorate General of Traffic (DGT) has been working on a number of modifications and improvements to the driving licence system in Spain, including new rates, changes in the system of road training and examinations, and allowing car drivers the opportunity to extend the catalogue of vehicles their licence covers. Although the final drafts are still yet to be released, they were put on hold for the elections; many of these changes are expected to come into force in July when the process restarts shortly. The latest draft included changes to the class B driving licence, which will authorise holders with two-years driving experience to drive vehicles intended for the transport of goods with a mass between 3,500 and 4,250 kilos . This is an increase from the current designation which ensures the maximum authorised mass (MMA) does not exceed 3,500 kg, which are designed and constructed for the transport of no more than eight passengers, in addition to the driver (nine people in total, at most). It is not the first time that modifications have been introduced to driving laws which extend vehicle options for class B licence holders. Since October 2004, every driver with the B permit can ride a 125cc motorcycle if it does not have a sidecar and if it does not exceed a power of 11 kW. For this, and without further paperwork, the driver must have qualified experience of three years. In addition, the age limits are being reduced for some licences. Depending on the type of vehicle and its use, the age limit to obtain category C, D, D1, C + E, D + E and D1 + E will be reduced, once the licensee obtains a Certificate of Aptitude Professional (CAP). In addition, those who want to obtain the permits C, C1, D, D1 (trucks and buses) or combined B + E, C + E, C1 + E, D + E or D1 + E (articulated), should be able to benefit from a reduction in the minimum training schedule on the risk factors associated with the type of vehicle that will be examined, so long as they then satisfy the test requirements.

Disruption for vehicles around Rojales school

A Security and Protection Career: Top-Paying Positions to Consider

Roundabouts in the province are among the most dangerous in Spain

La Vuelta to hit the region on Saturday afternoon

Good education is also a trend

Half of drivers do not know how their pet should travel