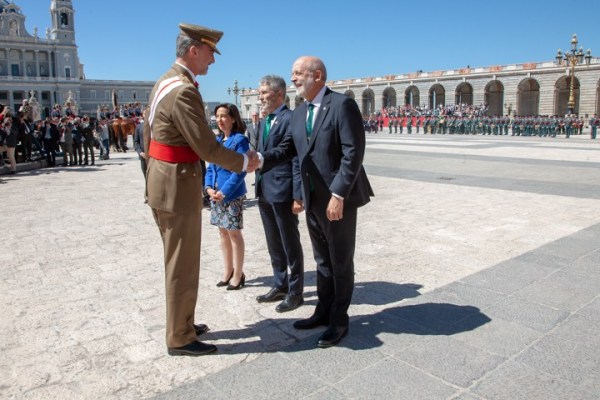 On Monday, 13 May 2019, the King and Queen of Spain presided over the ceremony marking the 175th anniversary of the founding of the Guardia Civil.

You may have seen the commemorative stickers marking the event which have been displayed on most of the Guardia Civil vehicles for the past few months, and even seen some of the commemorations that have taken place.

The official commemoration took place at the Plaza de la Armería of the Royal Palace of Madrid. The act was also attended by the acting President of the Government, Pedro Sánchez; the President of the Congress, Ana Pastor; the President of the Senate, Pío García-Escudero; the acting Vice President of the Government, Carmen Calvo; the acting Minister of Defence, Margarita Robles; the acting Minister of the Interior, Fernando Grande-Marlaska; the General Director of the Guardia Civil Félix Azón and the Deputy Director of the Guardia Civilm. , Laurentino Ceña, among other civil and military authorities. The Director General thanked the royals who presided over the commemoration, and conveyed the “pride that this body feels for the continued support that the Crown shows us, a body that was born under the reign of Isabel II, and whom King Alfonso XIII considered the most loyal Institute of the Spanish Monarchy”. He also stressed that on this day, exactly 175 years ago, Queen Isabel II signed the Royal Decree that made it possible to formulate the definitive rules for the organisation of the Institution. Félix Azón continued by pointing out that “throughout these years, the Institution has remained tirelessly with society, rendering service with vocation, professionalism and dedication, which has motivated the Guardia Civil to be today a Benemérito Body that, besides security, transmits closeness and confidence”. For this reason, with this act, we want to transmit to the Spanish society the renewed commitment of service, built on its principles and values, while maintaining a dynamic evolution to the rhythm of the times. He also pointed out that the Civil Guard will continue, as it has always done, updating itself in mentality, heart and structures to adapt, and as far as possible anticipate, the challenges of this new society. For the good and effective performance of its missions and tasks, the most important asset that the Guardia Civil has is essential: its human capital, the women and men that make up the Institution, which is why work is being done to improve professional conditions and of family and personal conciliation in the Institution; in increasing the number of women who join and strengthen training. Likewise, the Director General has conveyed his sincere gratitude to all those who have completed their term of service and have left, and to the top representatives of the French National Gendarmerie, the Republican National Guard of Portugal, and the Carabinieri and the Guardian of Finance of Italy that today also accompany us and honour us with their presence. Finally,there was an emotional memory to all the officers who in these 175 years gave their lives in service, referring expressly to Juan Luis Vara, the latest officer who died last Saturday while regulating traffic in Valladolid. He also recalled in a special way those killed by terrorism that caused so much pain. At this point, he mentioned Alfredo Pérez Rubalcaba, a politician who died last week, highlighting his role in the end of the terrorist group ETA.

The Act has consisted of a Military Parade and a parade in which more than 900 officers have participated, in addition to a section of the Cavalry Squadron, a fixed wing aircraft and several motorcycles and vehicles of the different specialities of the Guardia Civil.

Foundation of the Guardia Civil The Guardia Civil was created on March 28, 1844, by a Royal Decree, as a special armed force of infantry and cavalry. The responsibility to organise the body was entrusted to Field Marshal Francisco Javier Girón and Ezpeleta, II Duke of Ahumada. On April 20, the Duke of Ahumada presented a report on the organisation of the corps that led to the immediate repeal of the first Royal Decree, which did not even come into force, and the publication of a new one on May 13, 1844. The Guardia Civil Today The Guardia Civil is present throughout the national territory, exercising responsibility for citizen security in 84% of the peninsula, with more than 75,000 people and 2,000 positions. During 2018 the Guardia Civil carried out 7,250 daily patrols, travelling 387 million kilometres and carried out 246,000 rescues. It has also carried out 41,500 surveillance services in school environments and has given 13,000 talks to students. Another aspect to highlight has been the 2,400 assistance interventions and 1,400 talks to elderly people. Specific Missions The Guardia Civil must ensure the control of weapons and explosives; the State Fiscal Reserve; interurban traffic, except in those Autonomous Communities that have assumed control; the custody of communications routes, ports and airports; and the protection of nature. For the performance of all the missions that the corps must fulfil there are more than 75,000 personnel, belonging to 25 specialist groups, among which are: Traffic, Nature Protection, Air Service, Cynological Service (dogs), Deactivation and disposal of Explosives and Nuclear, Radiological, Biological and Chemical Defense (NRBQ), Maritime Service and Underwater Activities, Mountain Service, Fiscal Service, Weapons Intervention, as well as Investigation Units (Information Service and Judicial Police) and Special Intervention Units (UEI) , GAR and GRS). At present, the Civil Guard is also present abroad, deployed in the different international missions in which it participates, as well as in advisory work and collaboration with police from other countries.