As though we didn’t already know, the Meteorological Laboratory of the University of Alicante (UA), is telling us that the weather is changing on the Spanish Mediterranean coast, the latest example of which has seen constant rainfall for almost 48 hours, dumping between 50 and 100 litres per square metre on both us and the many thousands of holidaymakers who have forsaken wall to wall sunshine for the heavy rains of the southern Costa Blanca.

The Laboratory Head and President of the Association of Spanish Geographers (AGE), Professor Jorge Olcina, explained that in many locations the record of rainfall for the month of April has been well and truly broken, with data showing as much as 102 liters per square metre registered in Cartagena, 90 in Torrevieja, 80 in Pinoso and 35 in Alicante.

And although the heaviest rain fell in just two or three hours, with the highest intensity recorded between 4 and 6am on Saturday morning the likelihood is that it will continue at least for another couple of days.

The data held in the Climatology Laboratory of the UA suggest that it is necessary to go back to Good Friday of 1946 to find a similar April rainy period in the centre and south of Alicante, when about 100 liters per square metre were collected in many areas of the province. In that year, it was also the case that Good Friday fell, as in 2019, between April 19 and 20.

In Torrevieja twelve avenues and main roads are flooded and closed to traffic including several sections of the CV-905 from the roundabout between Carrefour and the headquarters of the Local Police. The N-332 is still fully open but a number of the roads leading off are closed.

The Local Police say that many drivers are not paying attention to their safety instructions, cones and barriers, which have been put in place to avoid the passage which is causing traffic jams in the CV-905 in the area of Rosa Mazón close to Carrefour.

In the last 48 hours the rain gauges have collected up to 150 litres per square meter (154 neighborhood of Aguas Nuevas).

Torrential rains have come at the time of greater residential tourist occupation of the city. Many commercial and hospitality establishments have not been able to open their doors or have opened late. Large stores in the Ozone, Habaneras and Carrefour areas have opened their doors, which has caused heavy traffic. Many drivers have not respected the instructions of the Local Police and the barriers that prevent entry to the main waterlogged avenues and roads. 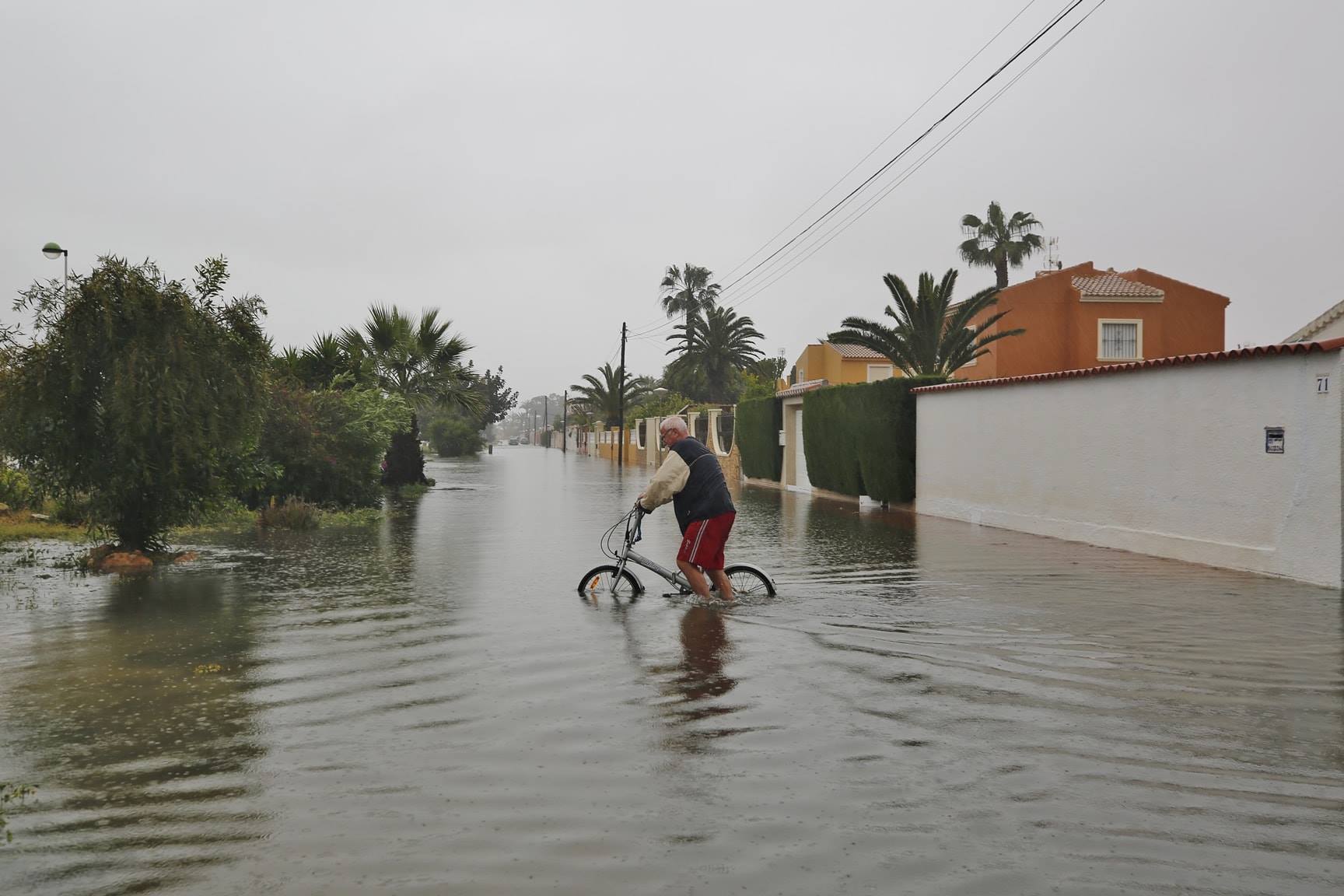 The council has reported that the avenues of Delfina Viudes, Cortes Valencianas and especially the CV-905 are closed from the roundabout of the local police headquarters. This is the main access to the city with an average passage of 30,000 vehicles per day in four lanes.

The Councillor for Security, Javier Manzanares has recommended reducing travel as much as possible until the situation improves. In addition to the problems caused by the accumulation of water, firefighters have had to respond to falling trees, flooded garages and landslides. Something that has also occurred in other municipalities of the coast of the Vega Baja, as is the case of Guardamar del Segura, Orihuela Costa and Pilar de la Horadada.

As at 1pm Saturday the following routes are currently closed to traffic:

– C / Apolo from the C / Ramón Gallud to the roundabout of Avenida de Baleares flooded, possible next court

– AVD. from Paris from C / Galeón to Torrejon Alto, open but flooded

– Access to CV-905 and C / Gardenias with Avda. de Nenufares. Alternative route does not exist

– CV-905 itself is open to traffic, is checked to the roundabout access to the AP-7

* Also, remember that the public transport service is suspended from 08:00 hours.

In Orihuela, the Segura River has increased its level considerably, although at the moment there is no risk of it overflowing.

Civil protection has been monitoring the situation since early this morning, according to the Councillor for Emergencies, Víctor Valverde.

In the neighborhood Mariano Cases there have been problems when some irrigation channels have overflowed, so they have had to close the surrounding areas.

Valverde has requested “calm” and that the advice and information from official sources is followed to avoid unnecessary alarms. “Problems of possible overflows should be reported immediately, but right now there is no major risk as was the case in 2016.”