Thankfully, the support of the Hondón de los Frailes Ayuntamiento and a small, but effective team of support staff, made everything possible. All profits are donated to The Children’s Care Home in Elche.

Unexpectedly, the evening’s entertainment started in the entrance to Hondón de Los Frailes’ El Teatro when Kim Vance (a last minute replacement for the injured Jill Jordano) dressed as the ‘saucy’ French maid ‘Regine’, greeted those of us queuing to collect our free programmes. 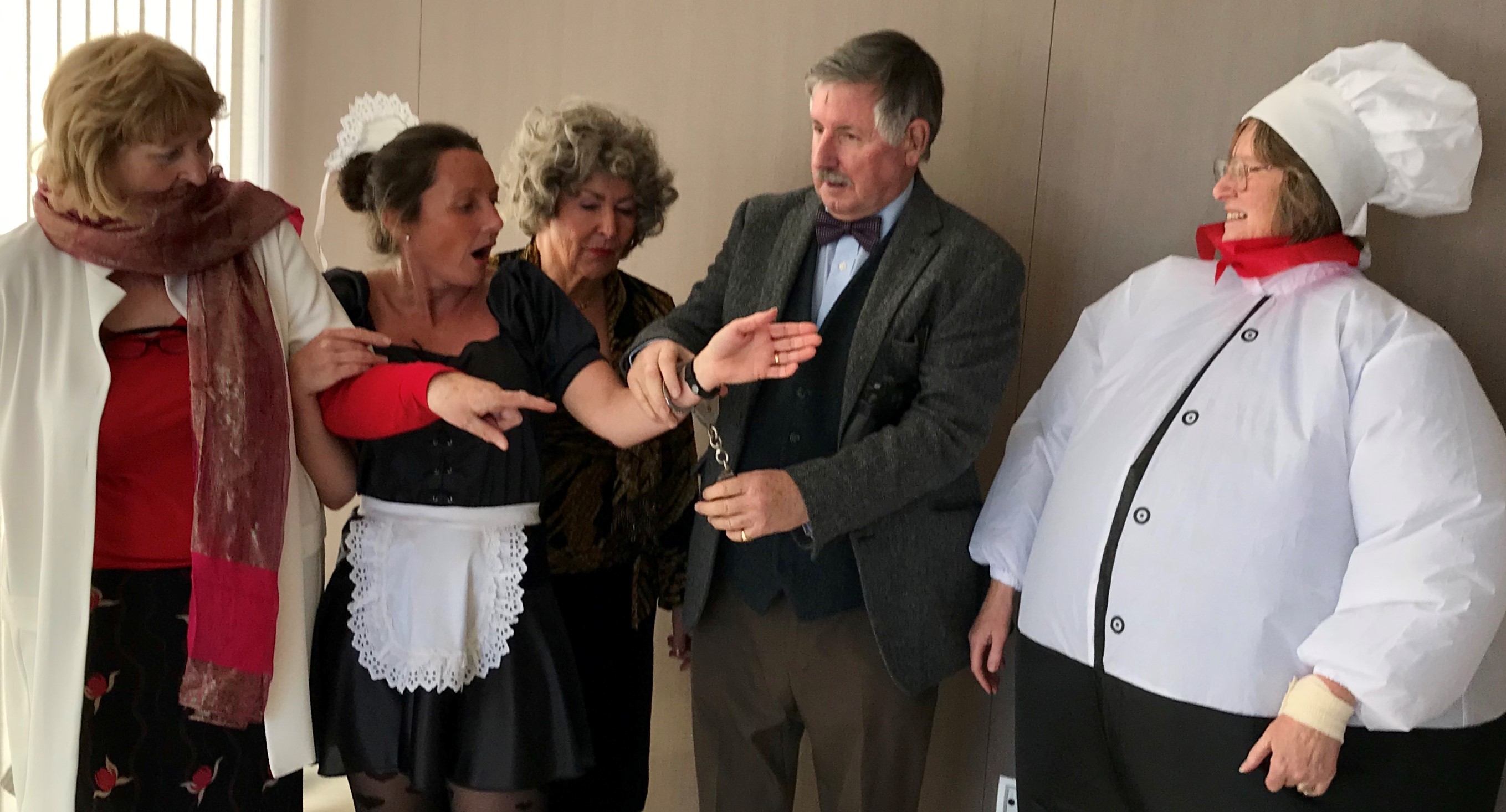 The brilliant Sandra Ward, as the scripted Chairperson, heralded the start of a production that occasionally reminded me of the fondly remembered ‘Acorn Antiques’. The eight Cast members, gainfully played the numerous characters.

Unexpected costume and character changes added to the confusion and amusement. Richard de Ste Croix’s purposefully troublesome set had a mind of its own, offering an additional degree of uncertainty.

As a lover of farce, I found the absurdity of the piece, thoroughly entertaining.  All the cast were well rehearsed under Lorraine Latchford and Julie Cooke’s direction. Anna Woodham as Lady Doreen and Barbara Colclough as Pawn kept the gaffe-filled plot moving along nicely.

Thankfully Joe Logan, playing Daphne, disguised his masculinity well within a badly tailored tennis skirt: but reinvented himself in the closing scene as an Astronaut wearing a domestic hot water heater as a back pack! Chris Wyatt, playing Inspector O’Reilly with more than a hint of ‘Clouseau’, benefitted from wearing the same costume throughout. 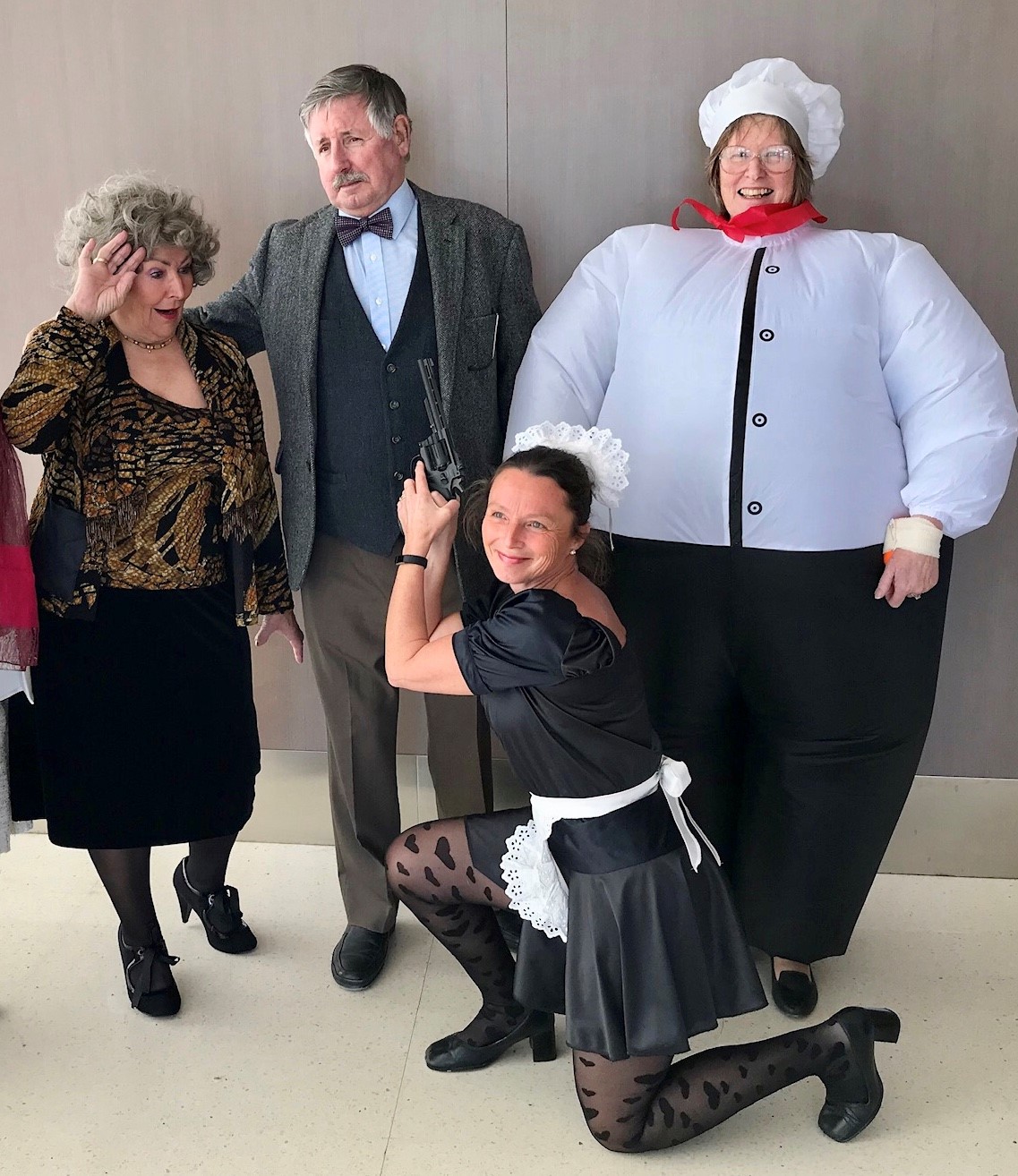 Along with his “sister” Patricia de Ste Croix, Len Simm  had one of the least demanding roles as a wheel-chaired curmudgeon. Later he played the family solicitor. Last, but by no means least, Peggy Wyatt, as a Cook in an inflatable suit, was an extraordinary sight.

Jacqueline Logan, the ‘prompter’, unashamedly sitting amongst the audience, was only required once to my knowledge: but I could be wrong … not knowing if her intervention was necessary or scripted.

Judging by the reaction of those sitting around me, everybody enjoyed the performance. I hope that DIVAs continues to entertain us for years to come: particularly those like me, who lack the ambition … or talent to ‘tread-the-boards’ themselves!

No doubt the next production will be more ambitious, requiring more cast members … so DIVAs would welcome any aspiring ‘performers’ to join them before their next production: whatever it may be!

Those of you with an unfulfilled dream ‘to get up on stage’, are cordially invited to contact Julie Cooke at hondondivas@gmail.com.

I leave you with this …. Sir Thomas Beecham is reputed to have once remarked, ‘If there is to be a chair for Theatre Critics … I think it had better be an electric one!’

Eye strain on the rise in lockdown