Could this finally be the beginning that the Orihuela Costa has been waiting for, a new coalition that was launched on Friday to contest the 26 May municipal elections?

Comprising of C.L.A.R.O., Cambiemos and Unidos Podemos, the three parties have agreed to form a coalition on the basis of a new Orihuela, committed to sustainable development (no more uncontrolled building without corresponding services and infrastructure), de-centralisation of its administration, with equal and proportionate investments, guaranteed rights to services, respect for the environment and equal rights.

Lofty ideals indeed, but with the ruling Partido Popular in turmoil, a 2 year suspended jail sentence just last week for a former Orihuela PP Councillor, the previous PP mayor facing jail herself and the current PP mayor the subject of a fraud investigation by the Ministry of Health, there would seem to be no better time to launch such a political initiative in the municipality between three parties that hold common local political aspirations.

C.L.A.R.O. has been working with Cambiemos throughout the past 4 years, in particular on environmental issues such as the saving of Cala Mosca, the last green area on the coast, which is threatened with the construction of 1,500 new houses. Both parties also recognise the need for proper parks and gardens in Orihuela Costa.

Recently Cambiemos presented a motion in the Town Hall plenary, with the support of C.L.A.R.O. and other coastal associations, for a radical de-centralisation of the administration and finances of the municipality, equal to fiscal autonomy.  However this motion was defeated by the Popular Party-Ciudadanos government coalition.

As well as holding common local political aspirations, another strong reason for the coalition is to counter the bias of the electoral system which penalises parties failing to reach a threshold of 5% of the total votes cast.

In the 2015 elections C.L.A.R.O., with 1,400 votes, failed by 35 votes to elect a councillor.   Podemos with 900 votes also failed and together well over 2,000 votes for parties in the new coalition were completely lost.

This time, together with Cambiemos, which currently holds two councillors but in 2015 narrowly failed to elect a third the coalition believes that they have a real opportunity to elect a strong group which will be effective in changing the government of Orihuela, or will at least form part of a strong opposition, including a C.L.A.R.O. councillor who will provide a voice for Orihuela Costa in the next municipal government.

Another positive factor is that the coalition has offered one of its posts on the list of candidates to an independent representative of the newly formed and potentially important Agrupcacion de Electores or Citizens Movement which has begun mobilising the mainly Spanish population of Orihuela Costa.

It is hoped that this will enable supporters of this movement to join C.L.A.RO. in obtaining votes in Orihuela Costa to ensure that the voice of the coast will be not only strong in the coalition but also in the new Town Council. 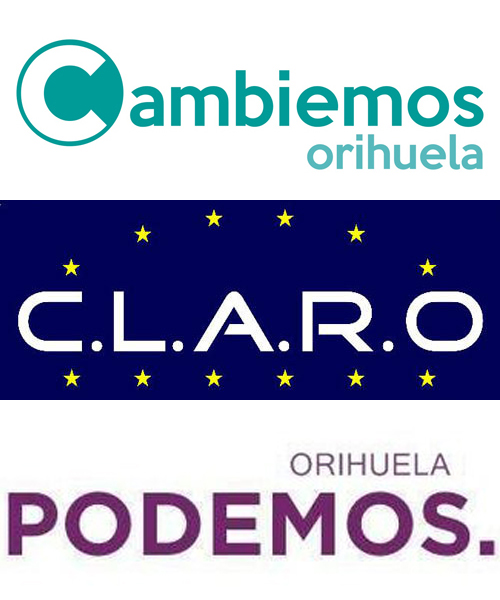 An important consideration in achieving this aim will be to ensure that British voters, whose right to vote has been confirmed, irrespective of the outcome of Brexit, will participate actively in the forthcoming election.  British voters represent a considerable electoral force in Orihuela Costa and it is hoped that they will show their appreciation of the generosity of the Spanish government in ensuring the conditions for their continued residence in Spain by exercising their right to vote and participate in decisions concerning their local environment.

Although the coalition is still to publish it’s current electoral list it is understood that Cambiemos councillor Carlos Bernabé will head of the list, while María G. Sandoval (winner of the Podemos primary) will be listed as number 2, Javier Gracia (Cambiemos) will be in the third position while C.L.A.R.O’s President, Helene Akermane will sit at number 4. Mamen López Raya, the representative of the Orihuela Costa Agrupcacion de Electores or Citizens Movement, will feature at number 6.

On the ideological differences between the 3 parties, Carlos Bernabé said that “we have set aside many of our differences and we now have a clear and clear common framework.”

The foundations of the agreement include changes to the urban model, “to move towards a development that is more sustainable, respectful of the territory and economically fair,” they said. The increase of the decentralisation and political and administrative autonomy of the Coast and districts; Equity and proportionality in investments, the administrative strengthening of the City Council and the protection of public services have been other highlights of this coalition agreement. It will also aim to “structure, unite, and guarantee equal rights and services throughout the municipality.”

For almost forty years, discussions leading up to the Orihuela municipal elections have centred on one thing: the number of votes that the Partido Popular (PP) would gain and the size of their majority, as they set about forming the next municipal government.

Four years ago the party was given, what should have been, a wakeup call, a result that saw them achieve just 11 of the 25 available seats. Hence, in order to ensure that they remained in power they set about establishing a coalition with Ciudadanos, thereby safeguarding their leadership majority in the municipal government. As a result, the political pendulum remained obligated to the people residing in the urban capital.

The PP had achieved their slender majority despite a backdrop of corruption by leading members of the Party which, at the time, offered a bleak picture of the political group, with the results being replicated nationally.

Unfortunately the intervening years failed to see them learning any lessons but with the continuing apathy of many coastal voters at the 2015 municipal elections they were able to gain selection one again, since which time they have continued with their long history of using the income raised principally from taxpayers on the coast to provide greatly superior services and investments for Orihuela city.

Helene Akermane said that the coalition will help to end the present paralysis where Orihuela Cost has no voice in the government of Orihuela. “We believe that the coalition will show that the whole is greater than the parts and together we can ensure a change of government which will better serve the whole municipality. The parties in the new coalition, together and with the support of voters, can ensure a better future for Orihuela Costa and Orihuela”.