The President of the Government, Pedro Sánchez, travelled to Brussels to take part in the European Council of Heads of State and Government on 21 and 22 March, which is addressing the withdrawal of the United Kingdom from the European Union, and which is also expected to adopt conclusions on such matters as jobs, growth and the competitiveness of the EU, climate change and the fight against fake news in the context of the upcoming European and national elections.

​On Thursday afternoon, and as part of the half-yearly meeting, the EU27 held an Extraordinary Council meeting to decide on the potential extension of the Brexit negotiation period provided for in Article 50.3 of the Treaty of the European Union, as requested by the British Prime Minister, Theresa May.

After a long discussion that went on until nearly midnight, the EU27 accepted delaying the withdrawal of the United Kingdom until 22 May 2019, conditional upon the British Parliament voting in favour of the withdrawal agreement next week. Should Westminster not approve the agreement, by 12 April the British Government must notify its intention of standing in the European elections to be held in May.

Lastly, the European Council backed the political agreement reached on 11 March in Strasbourg between Theresa May and the President of the European Commission, Jean-Claude Juncker, endorsing the “instrument” tied to the Withdrawal Agreement and the joint declaration, which complements the Political Declaration on future relations between the EU and the United Kingdom. Both documents have been described by the Government of Spain as “guarantees” for the approval of the agreement by the House of Commons.

Following the meeting, the President of the Government, Pedro Sánchez, explained that the agreement is “satisfactory for both parties”, since it complies with the goal of “safeguarding strong institutions and the legal certainty of the EU in the upcoming election process in May”. “This is a good agreement for Spain”, he said. “We have shown our empathy with the British Government and maintained a very constructive position so that Theresa May can push through the withdrawal agreement”, concluded Pedro Sánchez. 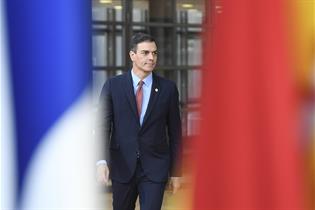 The President of the Government also stressed that “this all goes to show that we do not want to see the disorderly withdrawal of the United Kingdom (‘hard Brexit’); and now is the time for the British Parliament to tell us what it wants”.

Faced with a potential no deal Brexit, Pedro Sánchez conveyed a message of confidence. “Spain is ready” he claimed; “the government has drawn up a contingency plan that we hope will be endorsed by a parliamentary majority, and we will work to ensure the best possible relations with the British people. That is our top priority”.

At the ordinary meeting on Friday, the leaders will address the preparations for the upcoming European Summit with China and commemorations for the 25th anniversary of the European Economic Area, which the Prime Ministers of Iceland, Liechtenstein and Norway have been invited to attend.

The EU28 will also adopt conclusions on jobs, economic growth, climate change and the fight against fake news.