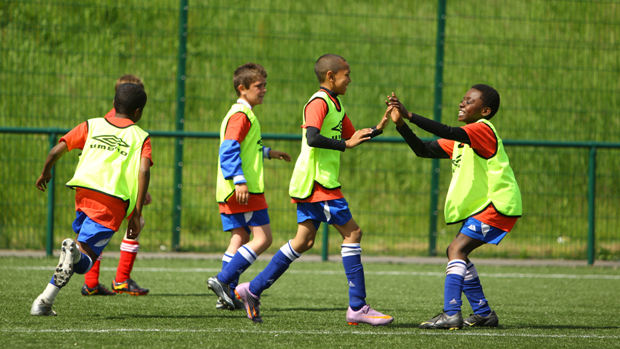 Daya were quickly into their stride and were soon pushing their opponents back with their direct style of play.  With just four minutes on the clock the home side went ahead when Marcos hit a fierce shot that flew in off the base of the post with the visitors keeper stranded.  Formentera tried to raise their game but it was not easy against Daya’s quick attacking play but all the while it was just the one goal in it the visitors were still very much in the game.

On fifteen minutes Daya’s Josue almost doubled the home side’s lead but his effort went just wide.  Minutes later the usual Daya defence blunder gifted the visitore the goal that leveled  the scores.  So after twenty minutes of it being all Daya it was back to the drawing board for the home side.

On twenty five minutes Daya’s Rocamora had the keeper beaten all ends up but his curling shot went just wide.  Following an horrendous blunder on twenty eight minutes by Jaime in goal Daya went 1-2 down.  It was all square within a minute when Rocamora received a great pass and his rocket shot whistles past the keeper.

The home side regained the lead on the stroke of half time when the visitors keeper caught the cock up bug and could not hold on to a shot, Marcos following up had the easiest of tasks to tap the ball home.  So 3-2 Daya at the break following a half of defensive errors . Formentera started the second period better but Daya’s defence was up to the task, for the moment anyway !

With the time now at 10.15pm the pitch was becoming a problem as it was wet through with condensation causing several players to lose their footing.  It had become a pretty boring affair by midway through the second period.

Just one more goal would probably be enough to make sure Daya had all the points but you could not see where the goal was to come from.  Unfortunately for the visitors they had to change keepers due to an injury.  With twenty minutes to play would the change of keepers work in Daya’s favour ?

It did not change anything really as both sets of defenders cancelled out each other’s attackers.  So a quite boring second half came to a close at almost 11pm with Daya 3-2 winners and my bed and cocoa calling me.