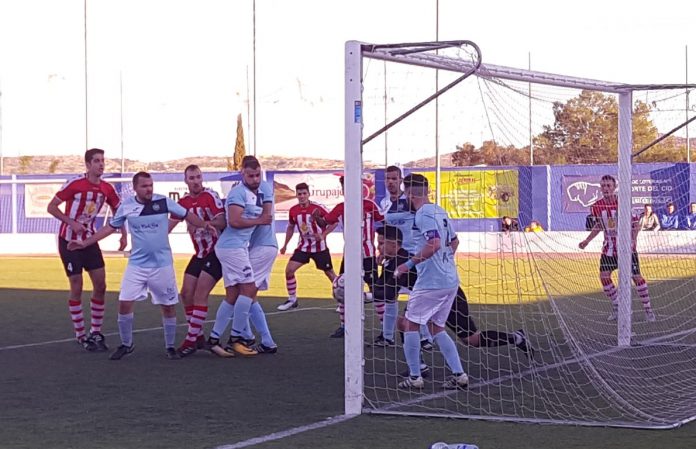 Fresh from their crushing of San Fulgencio last week, Monte journeyed inland to the granite region, home to Monforte CF, in their continuing quest to garner sufficient points to maintain their status in the 1st Regional Valenciana Grupo 8.

In a tight, tidy ground and bolstered by a boisterous travelling support, Monte were able to name an unchanged side for the third game running. The bench welcomed another recruit from the Juvenil ranks with rookie keeper Sergio joining the group in the absence of Steven.

The game kicked off and straight away it was easy to spot Monforte’s tactics, they defended deep and rarely, if at all, committed players to the attack, preferring instead to try and catch Monte on the break. It was this ploy that nearly bore fruit on nine minutes when a cheeky lob almost caught Carlos in the Monte goal out.

The referee, it has to be pointed out, was missing some glaring pushing and pulling by the home side, who were clearly trying to intimidate and break up Monte’s midfield play, which was starting to look like it might be key to the game. Alex and German were being their usual nuisance selves and the tricky Carlos Lorente was proving to be the bane of the Monforte defensive line with his darting runs.

It was he who caused problems and perhaps should have done better on the half hour mark when, one on one with the keeper, he fluffed his lines.

Nevertheless, Monte continued to build from midfield with some patience and skill, trying to work an opening. Monforte, backed by a clearly on-form keeper continued to hold them at bay, whilst offering little of note in attack.

The half petered out with neither side able to break the deadlock.

The second period started with more of the same to and fro. On the 55th minute, Vaz had a chance to open his account when another one on one failed to result in a goal, thanks again the home goalie. Almost instantly, Monforte broke and were, it has to be said, unlucky only to clip the outside of the post with a snap attack. A let-off for both sides then.

Almost immediately, Coach Ruben rang the changes, taking off the unlucky Roberto and replacing him with Mario Pastor.

Minutes later, Monte had a chance to take the lead when Vaz, having been tripped in the area, took the penalty himself, only to see the goal-bound attempt smartly saved. Vaz looked completely distraught. Had the chance of bagging all three points just slipped away?

Another substitution followed when the industrious David was replaced by Diego.

Monforte continued to defend deep, throwing bodies in the way of fierce shots from the now marauding Monte forwards, but still no breakthrough looked on the cards.

Coach Ruben made further changes, Dario replacing the splendid German and finally, the hobbling Alex exchanged for Manuel Siguenza. It very much looked like both sides, fearing defeat, had settled for the increasingly likely draw.

As the clock ticked on, Monte’s attacks became more and more frequent and, if has to be said, were repelled by a combination of stout defending and outstanding shot stopping by the home net minder.

With time rapidly running out and the referee having had several glances at his watch, Vaz, aided by a deft touch from the exceptional Carlos Lorente, brought the ball inside the area and unleashed a thunderbolt that finally avoided the grasp of the keeper and nestled firmly in the goal. The relief amongst both players and fans was palpable as the scorer was buried under a pile of players, roared on by the victorious travelling faithful. The home side looked crestfallen, their attempts to hold on

had failed at the very last.

Almost from the restart, a blast from the man-in-the-middle signalled the end of a tight, tense match in which both sides had worked hard, but Monte’s perseverance had finally paid off.

Monforte look a well organised side, but offer very little going forward and fail miserably in hitting the target with what chances they do carve out. They will struggle to remain in this division.

On the other hand, Monte have started to show their mettle in midfield, a solid enough back four and, with the arrival of Carlos Lorente, options up front. If this hard fought performance is an indicator, then they have a better than good chance of staying up. Vamos Los Rojos! Vamos Monte!

Next weekend’s game is away against Athletico Catral. Full details will be posted when known.