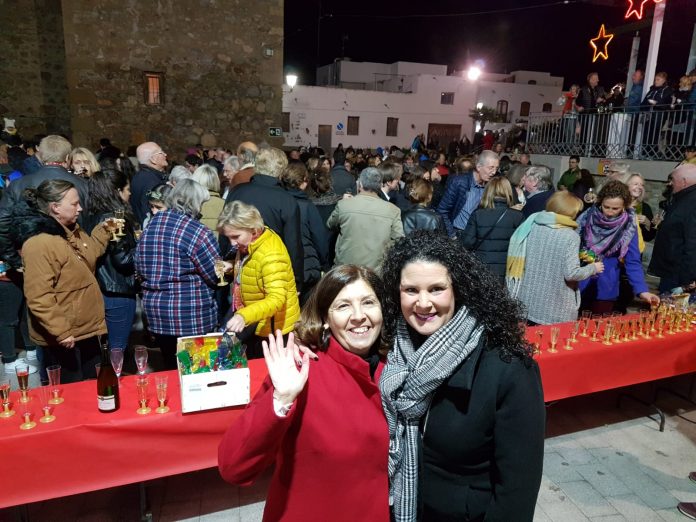 Mojácar bade farewell to 2018 and welcomed in the New Year at the Plaza del Frontón with the customary twelve grapes, an event attended by a large crowd of townspeople who gather every year in the Old Town.

This year, over 500 people quickly ate their traditional good luck grapes, taken one at a time to the midnight bells of the Santa María Church, with the wish to fill all homes with happiness in 2019.

Mojácar Council’s Festivities Department organized the party for this special occasion, as it does every year, with complimentary grapes and cava for everyone handed out by the Mayor, Rosmari Cano and her Government team.  With family, friends and colleagues, she joined in with the swallowing of the grapes, as she always does, to welcome in the New Year with the people of the town.

Every December 31st sees a greater attendance, swelled by the many townsfolk of other nationalities and, although mainly British, French and German, there were Mojácar residents also representing many other countries.

This unique Spanish tradition of eating twelve grapes as the clock chimes at midnight is an immensely popular and almost unmissable event that is enjoyed on the magical night of San Silvestre.  The fireworks, set off from the Church’s bell tower, lit up the Mojácar sky with colour to the sound in the square of the residents toasting the occasion and wishing each other all the best for 2019, a year that by then had already begun its journey.