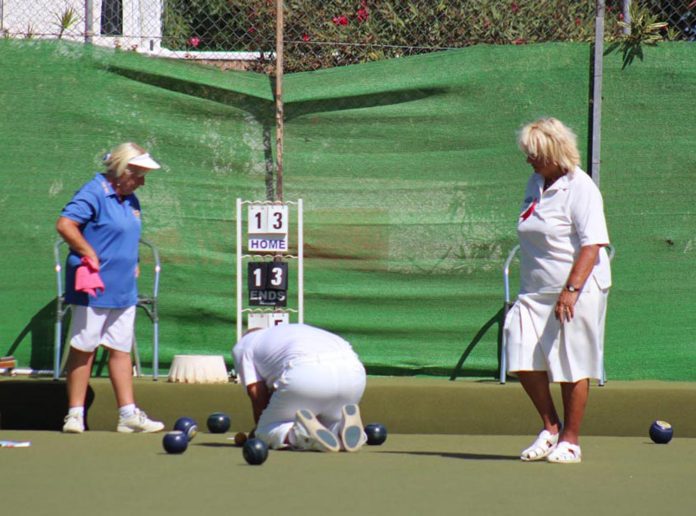 The early morning start to travel to Quesada was soon forgotten as El Cid collected wins on 4 out of 5 Rinks against a strong Quesada team laying in 4th place and with home advantage.

Rink 3 was also close but Pat Metcalfe’s team were 10 – 7 down after 14 ends. Matching rink 2 they  fought back to also gain 10 points over the next 3 ends to go into the last end 7 ahead. Fred Robert’s Quesada team not to be out done were holding 7 (yes 7) with both skips 1 bowl to play. Pat played a perfect bowl to cut the 7 shots down to 3 and as everyone held their breath Fred tried to take out the only El Cid bowl in the head but missed giving us a win 17 – 13.

Rink 4. Once again we were 8-1 down after only 4 ends but came back be level 11 each after 9 ends and the lead then changed a number of times but it was Jim Pavelin’s team who were 1 shot down going into the last end but El Cid’s Betty Anderson, Geraldine Scutt and Hazel Brown helped Jim to a 3 shot last end win and a 2 shots win for the game.

Rink 5 was our only losing Rink a poor start saw Quesada take a 10 – 1 lead after 7 ends. It was a case of trying to limit the damage and the second half was a closer game but ended with a good win 19 – 7 for Quesada.

A lovely carvery meal was enjoyed by all in a friendly pre-Christmas atmosphere. El Cid Winter League Captain Derek Randall thanked all his squad for an unexpected but thoroughly deserved win and an early present of 10 points to 2 to El Cid.

Next week sees us back down south to Vistabella on Tuesday and then home to San Luis on Wednesday.