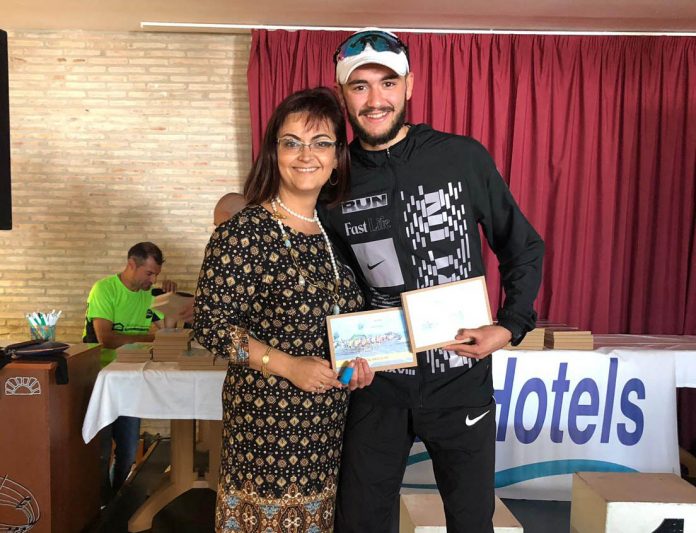 Mojácar recently held its VI 7Km and Half Marathon, organized by the local Council and Nogalte de Huercal-Overa, which this year included the two new categories for entrants with rollerblades and the Joilette adapted wheelchair.

The event was a massive success with almost 600 competitors from all over Spain, including a high British representation as well as marked increase in local participants, totalling a much higher figure than last year’s 400 entrants.  The addition of the two new categories proved popular with 140 skaters from Madrid, Toledo, Valencia and Andalucía talking their place on the starting lines.

With some high speeds taking place, the Local Police cleared the way first for highly colourful skaters who completed the course in excellent times. Alicia García Estevez was first to complete the 7Km race with a time of 16 minutes and 15 seconds with Edgar Saulinskas coming first in the Half Marathon with a time 39 minutes and 57 seconds.  Afterwards, all the skaters were keen to complement the both the local Council’s and Club Nogalte’s great organization as well as the suitability of the circuit, with the intention of returning in 2019.

In the Joilette 7Km section, the winner was Ángel Murcia García, from P.L. Lorca, with an amazing time of 40 minutes.  Pedro Antonio Lopez de Haro, from C.A. Nogalte was the winner of the VI Half Marathon, making the 21Kms in time of 1h.11m.41s, followed by Juan José Foulquie Padilla. The best in the Local classification was Pedro Jesus Valdivia López, followed by Ozanne Colin.  As for Clubs joint category, C.A. Sur Este was in first position, followed by Club A.D. Eliocroca.

In the 7Km race, Roberto Castellón Ortiz from C.D. Tader Molina, obtained the first position in a time of 23m.35s, followed by Luis Miguel Torroglosa González from C.A. Puertas Lorca.  Best out of the town’s local group of runners were; Mario Vizcaíno Garcia, Laszlo Somogyi and Amalia González García.

Mojácar’s Sports Councillor, Ana García, was there throughout all the races to check in person that the whole event went off smoothly and to keep a check on participating numbers.  Afterwards she presented the prizes at the awards ceremony, giving thanks to all the athletes, as well as the families and friends who had travelled to Mojácar and to C.A. Nogalte de Huercal-Overa and its Director Juanfra Carrillo.

All in all, it was day that passed without incident in any of the categories and was enjoyed fully by all the participants, who had the extra benefit of some fabulous weather.