Consell will not authorize the gypsum mine

The Minister of Sustainable Economy, Rafael Climent, has now confirmed that the project to develop a gypsum mine in San Miguel on protected land will never be authorised.

The counsellor met in Valencia with the neighbourhood association that did so much to mobilise the people of the municipality. Later in the day he also met with members of the San Miguel de Salinas council. The meetings were arranged by the local secretary of Podemos in Orihuela, David Vegara.

The neighbourhood association wanted to emphasise those impacts of the mine that have not been considered, such as the seismic risk of working with explosives on the San Miguel de Salinas fault. In a meeting that lasted almost two hours they also expressed their satisfaction at the attitude of the Ministry of Economy in supporting the wishes of the local community.

Ignacio Ramos said how delighted he was to be involved in such a gesture, that will mean so much to the Cáritas Diocesana of Pilar de la Horadada.  He said that it was testament to the human qualities of the businessmen in the municipality.

To mark World Diabetes Day on the 14th of November, Specsavers Opticas are offering free eye tests in their stores and providing advice and information on how diabetes sufferers can protect their eyesight.

“Over 425 million people are currently living with diabetes, thankfully most is well controlled, so the condition doesn’t affect the eyes, but each store will usually see two to three diabetes suffers with diabetic retinopathy each year who do require medical intervention.

We expect that to increase as the numbers of diabetes sufferers are on the rise”, commented Mike Stone from Specsavers Opticas in Javea and Calpe. “The good news is that early diagnosis, a healthy lifestyle and the right treatment can stop blindness through diabetes.

Knowledge is power with this kind of condition, so we’ve put together some useful information on diabetes and the eye and are offering free eye tests and information in store on the 14th of November.”

Grupo Avanza invest half a million in two buses

The operations manager of Grupo Avanza in Torrevieja, Luis González, was with councillor Javier Manzanares last week, at the unveiling of two new buses that will complement the Torrevieja bus service.

Each bus will carry 49 passengers as well as providing a double ramp that will allow access for people with reduced mobility. The two new vehicles will also have a real-time locator via GPS, which will provide information about the location of the bus as it travels along its route.

There will also be internal LED lighting, WIFI and USB connections. The investment in the two new vehicles exceeds 500,000 euros and both went into local service last Monday.

Manzanares said that this is “only part of a package of short term improvements that will further improve the urban transport of the city.” 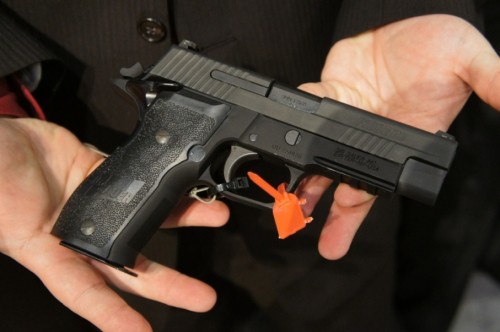 Orihuela Local Police are carrying weapons that are over 25 years old, which they say are defective and which compromise the security of the agents.

According to representatives of the Local Police unions (UGT, SPPLB and CSIF) there are currently three officers who carry weapons with more than a quarter of a century of service.

They say that they have been requesting the councillor for Security, Mariola Rocamora, to withdraw  these weapons for over a year but that she continues to issue no response.

The most surprising aspect, however, is that the City Council bought six new pistols several months ago, since which time they have been deposited in the Civil Guard armoury, without any sign of them being issued.

The mayor of Pilar de la Horadada, Ignacio Ramos, was accompanied by the councillor for Foreign residents, Aranxta Martínez, and the Honorary German Consul of Alicante, Murcia and Albacete, Dorothea Von Drahosch Sannemann.

In the afternoon, the British Consul, Sarah-Jane Morrison, held a meeting with British residents in which she updated them on Bréxit. There were also musical activities with the tasting of a variety of products of different nationalities which concluded with a giant paella.

The mayor, Ignacio Ramos announced that work will begin on the new Pinar de Campoverde office in the coming months, which will result in an improvement of services for local residents in the urbanisation and surroundings.

The mayor of Torrevieja, José Manuel Dolón, visited the southern part of the city on Wednesday morning, where he met with a large representation of British residents. He was there to hear their first hand claims about the area which he promised would lead to appropriate improvements.

During the excursion the mayor visited Cala Dorada, Mar Azul, Rocio de Mar, Rocajuna, Las Barcas, Sector I, Mariblanca, La Veleta and Los Altos where he concentrated specifically on the parks and gardens.

He agreed to open both gates into the Rocajuna Park, which have previously remained closed and in the same area, Altos del Rey, he said that the park will be cleaned. He also promised to prune and maintain the eucalyptus trees in Las Barcas.

Throughout the morning the mayor listened to the residents’ concerns which he said would be noted and taken into account by council planners.