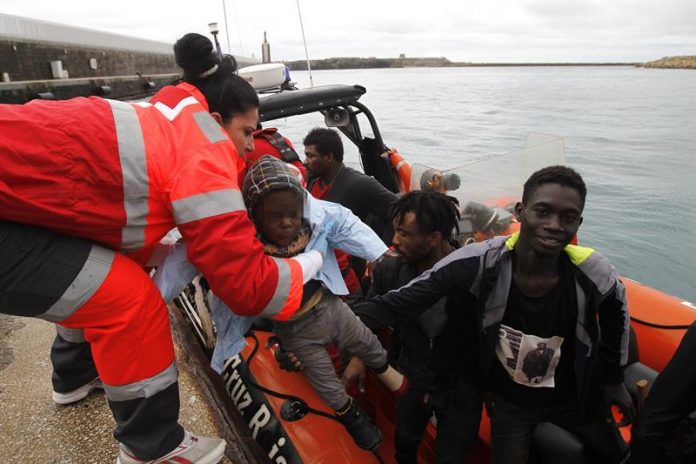 According to Red Cross sources, three boats with more than 40 illegal immigrants arrived in Cabo Roig, Alicante and Calpe during the early hours of Friday morning.

The Civil Guard intercepted a total of 21 immigrants in Cabo Roig at approximately six thirty in the morning. The boats, equipped with outboard motors, landed close to the large antenna operated by the ​​Integrated System of Exterior Vigilance (SIVE) of the Civil Guard.

At least five of them claimed to be minors (between 15 and 17 years of age, although that is still to be determined) and have been taken to the Civil Guard Barracks in Torrevieja.

Another of the boats, with twelve people on board, all of them men, was intercepted at around 8.45 pm on Thursday evening by Maritime Rescue, some forty miles from the coast of Alicante. The occupants were transferred by Maritime Rescue to the Alicante port, where they arrived at around 11.00 pm to be met by the Red Cross. These twelve immigrants, “between 19 and 33 years of age,” claimed to be of Algerian nationality, according to a spokeswoman for the Red Cross. All were said to be in a reasonable state of health.

However, three of them were taken to the Alicante General Hospital of Alicante: one due to an ankle sprain, another due to breathing difficulties from asthma and the third due to pain in the stomach after having ingested fuel (gasoline) after falling into the water.

A fourth boat with fifteen immigrants on board also arrived on Friday morning in Calpe. The Civil Guard and the Local Police arrested eight of them, who were taken to the Calpino barracks while the remainder ran off up the slopes of the Penyal d’Ifac. A fishing boat from the port towed the boat into harbour which had been aimlessly drifting without any form of power.