Located at the northern end of the Costa Blanca in the Alicante province, just ten kilometres south of Benidorm and 26 kilometres from the city of Alicante and it’s International Airport, Villajoyosa (La Villa Joiosa) is the capital of the Marina Baixa district and an ideal location from which to explore the rest of the Costa Blanca coastline.

Villajoyosa has a rich cultural heritage. It’s history as a town dates back to the 6th century and it has been settled by the Greeks, Phoenicians, the Romans and of course the Moors, when it actually fell into some decline, which is unusual for a Moorish occupied town.

The town as it is known today was founded in 1293 by an Admiral who served in the Kingdom of Aragon’s navy. It’s name Villajoyosa, literally means Joyful town.

Throughout the centuries Villajoyosa has been an important trade point along this coastline; trading in olive oil, cereals and wine, and shipbuilding, amongst others. But probably what it is most famous for is chocolate.

During the 19th century the town started to develop a chocolate-making industry. Because of its trade connections, it started importing cocoa from Ecuador and Venezuela and the industry grew and grew. The chocolate brand, ‘Valor’, which can be found in most shops and supermarkets throughout Spain comes from Villajoyosa.

During the 19th century another industry developed in the town, that of chocolate making. Started by a local citizen called Don Valeriano López Lloret, he began to import cocoa from Ecuador and Venezuela as a result of which the chocolate business grew and became a major earner for the town, a museum in Villajoyosa tells the history of this craft for which the town is famous and many tourist visit to taste the chocolate and learn about how it is made. 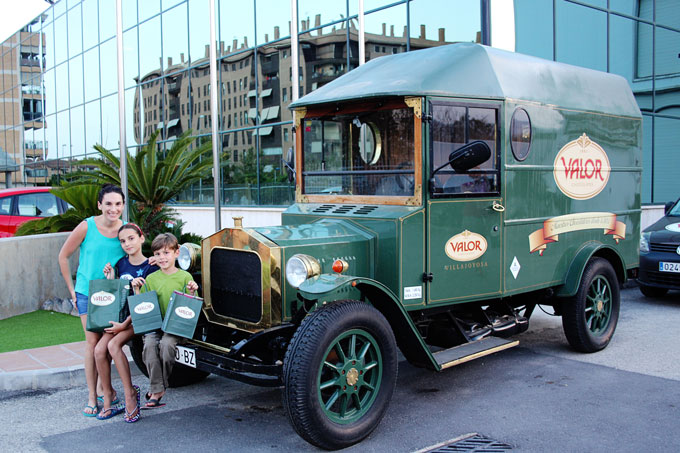 A small coastal resort which started life as a fishing village many centuries ago, it’s busy fishing harbour still welcomes in the town’s fishermen, and their daily catch is still auctioned off on the quayside much as it has been for hundreds of years.

One of the notable features of Villajoyosa is its brightly coloured seafront houses, painted in various shades of red, yellow and blue, the purpose of which was to stand out from each other when viewed from afar, so that its fishermen could see their individual houses from far offshore and steer their way safely home.

It has an old walled town centre, with a distinctive gothic feel, roman bridges and a traditional Spanish working town feel. Villajoyosa is really a ‘joyful’ place to visit.

There are plenty of amenities and facilities for holiday-makers: shops, bars and restaurants in abundance, a lively fish market and bustling local market, where you can pick up fresh local produce, home-made local souvenirs and crafts and other holiday items.

La Vila has three kilometres and a half worth of beaches, such as Centro, Paradís, and specially De Torres, with crystal waters, where we also find the archaeological sites of the tower of the Cross and the tower of Saint Joseph, the latter being popularly known as the tower of Hercules.

Villajoyosa is proud of its artistic historical site of great value, with a beautiful and labyrinthine network of streets and lanes with landmark buildings, Roman ruins and medieval walls. One of the most important monuments of the city is the Iglesia-fortaleza de la Asunción, one of the three church-fortresses of the province of Alicante and declared an Asset of Cultural interest.

A good time to visit Villajoyosa is during a fiesta or festival and a couple of the main ones in the town are during May (in honour of St Isidore) and September (dedicated to the Archangel Michael). Villajoyosa can be reached via the N-332 coast road or from the A-7 motorway, it is about twenty minutes’ drive from Alicante.

Villajoyosa’s seafaring tradition is also enhanced every year, towards the end of July, when Moors arrive by sea to fight the Christians.

You could also take trip by boat to the lovely Island of Tabarca. Visit the Caves of Canelobre, a marvel of Mother Nature; or head to Elche to see the largest Palm Forest in Europe, where you can enjoy a stroll through the subtropical environment.