“It’s taken me 18 years and it’s a mixture of excitement and relief that finally I have done it. I didn’t look at the scoreboard until the 18th green because I knew anything could happen. I knew I was doing fairly well, because I was playing well, but I kept to myself and let it happen,” said Morgan.

“I decided today I would just play my game and not worry about one anyone else was doing. I had the chance to win here three years ago but got too caught up in what was going on, so I needed to keep my head down.”

Morgan started the day in a three-way tie for the lead with Ellie Givens and Nicole Broch Larsen and quickly gained the advantage with a birdie on the short third hole. She birdied the fourth to gain a two-shot cushion and then made another on the ninth, taking a one-stroke lead through the turn.

She missed the green at the 11th, resulting in her sole bogey of the day, but regained a share of the lead with a tidy birdie on the 13th hole.

Halfway leader Christine Wolf, who ended her third round with a nine on the last hole, had clawed her way back into a share of the lead with a short birdie putt on the 17th green, but her title hopes sank at the par-5 18th. She hit exactly the same approach shot as she had the previous day, catching the ball heavy and hitting it into the lake in front of the green, running up a double bogey seven, for a final round of 70.

Wolf said: “I played well today, from the start onwards. I played very solid and then 18 got me again. It’s a nice hole, it’s just maybe I need to change my strategy or something. Of course, you think a little about it, when you are standing there. It was sitting okay, it was just another quick swing.”

Wolf dropped into a share of second with Caroline Hedwall, Felicity Johnson and Nicole Broch Larsen, who hit the green in two on the last hole and holed a 12-metre putt for her second eagle of the day.

“It was an up and down day. I didn’t have the best start and on nine, I drove the green and made this huge monster putt that got me going. I tied for the lead with Becky and then made a double, but an eagle on 18 to get me back to tied second was awesome,” said Broch Larsen (71).

It was a long journey for the 44-year-old Morgan, from Abergavenny, whose runner-up finish in the 2001 French Open was one of 22 top 10s finishes on the LET without a win, until her 119th tournament, at the venue where she had also tied for second in 2015.

“I have always loved everything about India. And that’s why I have kept coming back and I did come close to winning a couple of times and finally I got the job done this time,” she said.

One of the very few players to have played every edition of the Hero Women’s Indian Open since it joined the Ladies European Tour schedule in 2010, she has a great track record at the event.

In nine starts dating back to 2010, she has never missed the cut and finished in the top-10 four times, including the win this year in 2018.

Rising stars Gaurika Bishnoi and Tvesa Malik were the top Indian players in a tie for 13th place on one-over-par and Sifat Sagoo was the leading amateur in joint 33rd.

Camp for aspiring Indian girls hailed as a success 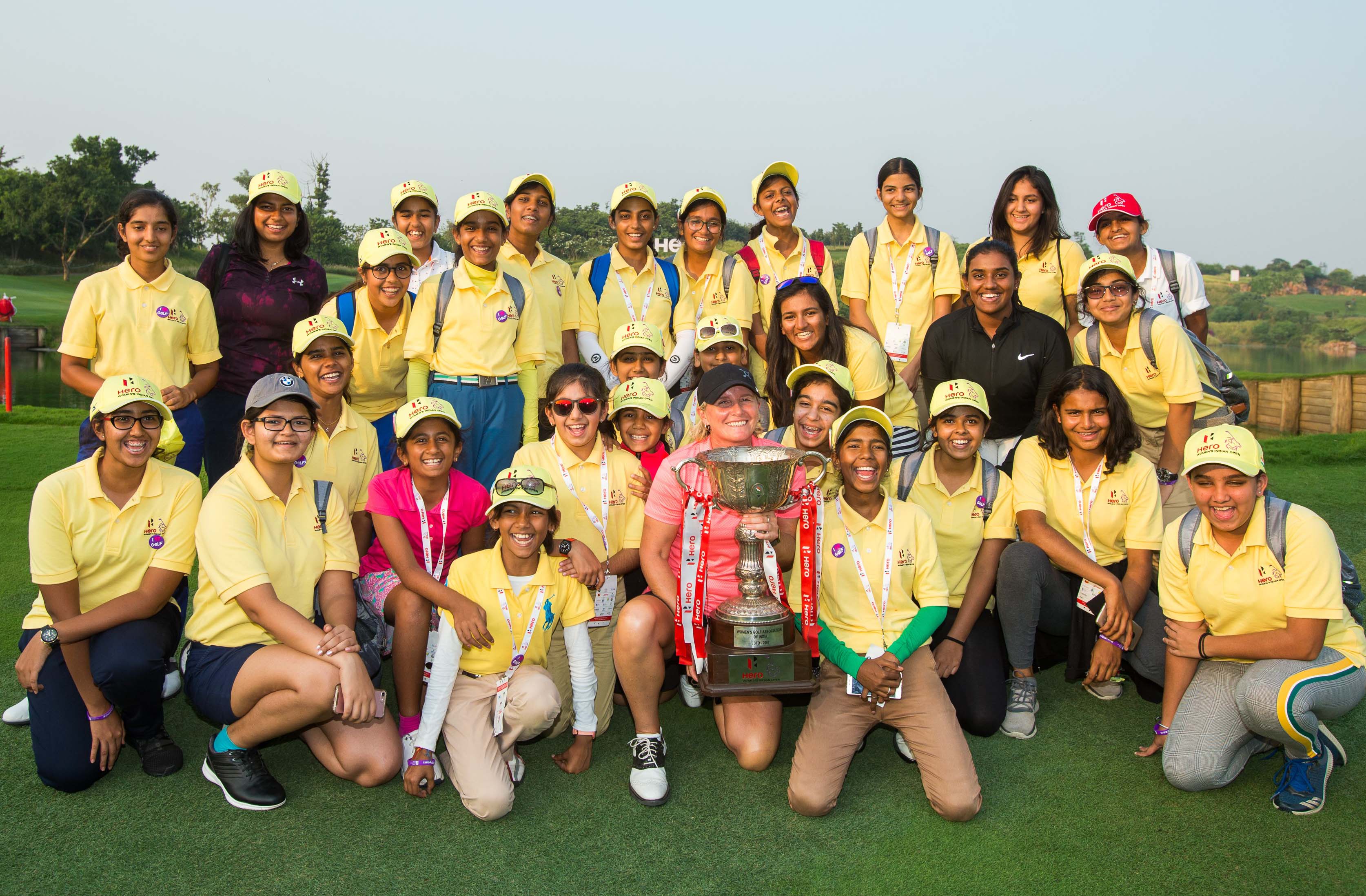 The 2018 Achievers’ Camp concluded at the Hero Women’s Indian Open with the girls being photographed with the event winner, Becky Morgan, at the prize giving ceremony.

Earlier in the day, the girls had a ‘behind-the-scenes’ tour and learned about the TV operation, the scoring procedures and the work of the golf journalists in the Media Centre. They watched the final groups go off the first tee and were then given the opportunity to hit balls onto the chipping green and driving range under the supervision of LET players Victoria Lovelady, Kiran Matharu, Astrid Vayson de Pradenne and Caroline Martens.

As the camp came to an end, some of the girls were asked about their time at a professional women’s golf event. One of the campers said: “I really enjoyed it. This was a really good experience and I’ve learned a lot. I feel like a lot of junior golfers in India need to come to events like this and learn from the players.”

Another one of the girls commented: “The camp was great! Watching the clinics and the players on the course was incredible. I hope I can take all these experiences into when I turn Pro.”

Before leaving, the girls were asked if they think the camp will have motivated them to go on to bigger and better things, the response was a resounding: “YES!”

After what was a memorable three days, the girls will return to their home clubs and tell inspiring stories and maybe they will return at some point in the future to take part in the main event and speak to the next generation of campers.