On 23rd September, 55 people in 15 cars left La Proa restaurant on an exciting adventure. Over the next three hours and covering over 50 kilometres, they were challenged to solve over a hundred clues and recognise ten special features from photos.

The course climbed the mountain at Valdelentisco and down into Las Palas then on to La Pinilla and up to Cuevas de Reyllo. Then in Fuente Alamo some considerable confusion was caused by a temporary diversion barrier across the planned route!

Just a few stragglers, determined to solve every single clue, kept the hunters waiting a little while but most had arrived at the destination in time to start the lunch in Las Palas

About half of the participants were already members of the humanist group and at the end of the day, many of the visitors expressed interest in the group’s beliefs and activities.

On October 6th a group of 30 Darwinian gardeners joined a tourist boat in Águilas for a cruise along the coast. We motored eastwards, into the Hornillo bay, where the history of the iron loading jetry was explained to us, then on to the Isla del Fraile where we had a close up look at the rock formations. After that, we went to a chinese restaurant. 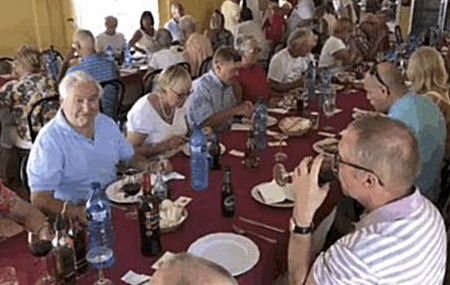 Next outing: November 3rd, we’ll go by coach to the Palm Gardens in Elche and the Moorish Tea Gardens near Crevillente.

On 19th September, we held the first of this winter’s Games evenings. We met at 5pm at the Hotel Playa Grande in Puerto. Games played were Mexican train, Triominos, Nomination Whist, Rummikubs and Jenga. Ten people came and were still going strong at 7:30pm.

Everyone, no matter of what religious persuasion (or none) is welcome. The next one will be on Wednesday 21st November, 5 pm at the Hotel Playa Grande. You can contact us at lillyedwardsanne@gmail.com or just turn up on the day.

Humanists are non-religious people who seek to live ethical and fulfilling lives on the basis of reason and humanity. Locally, The Humanists of Murcia have regular programmes in their walking, gardening, philosophy and discussion groups. They use the solstices and equinoxes as a good excuse for a celebration in addition to many informal get-togethers such as  summer lunches or games afternoons. For details of local meetings and events visit https://humanistsofmurcia.com and for more general information on Humanism see https://humanism.org.uk

How to Ensure Sustainable Healthy Life for the Elderly at Home