Organisers claimed that more than 400 people, many of them foreign residents, took to the streets on Friday evening to support the protest organised by La Zenia Citizen’s Movement, and which involved many other member associations of FAOC (Federación de Asociaciones de Orihuela Costa-Alicante).

The protest was in support of a better deal for the residents of the Orihuela Costa, who believe that they are being ‘short changed’ by the Orihuela Municipal Government in respect of budget allocations, as well as the provision of many basic amenities and services.

The demonstrators gathered during the early evening at La Zenia Beach where the President of Citizen Movement of La Zenia, Felix Arenas, read a statement criticising “the City Council which has sold our public land without paying the agreed 40% for investments in the coast.”

He addressed the mayor of Orihuela, Emilio Bascuñana, and his administration, pointing out that “We pay 60% of their salaries despite which he turns his back on the coast. He has failed to keep his promises, both those made during the PP electoral campaign and the many other agreements that he has made whilst in office. He calls himself a man of honour but all we have seen on the coast are lies, dishonesty and false promises, and we call for his resignation.” 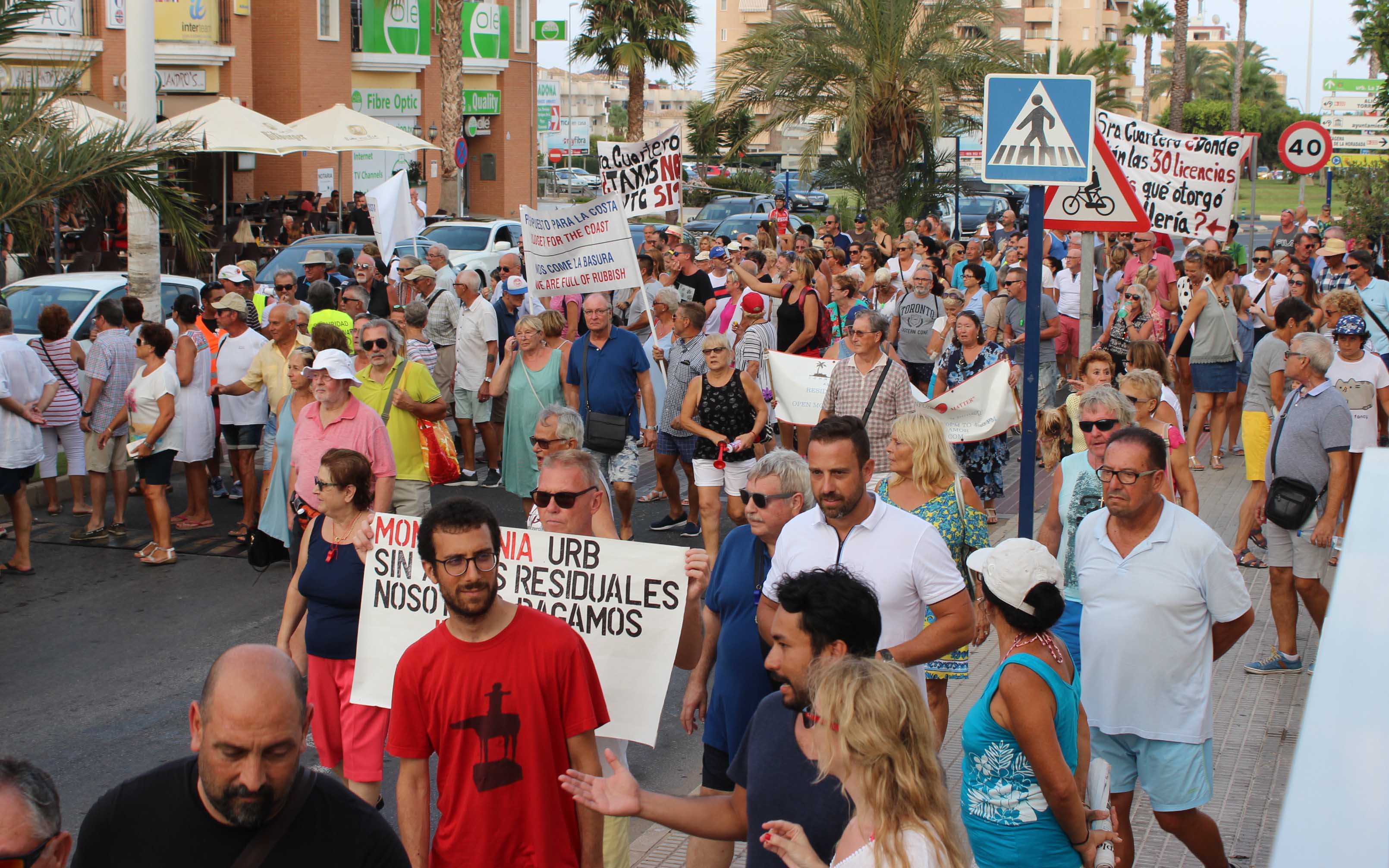 The protest was led by a banner that read, both in Spanish and in English, “Keep your promises. We pay taxes. Where do they go?” Behind, the main placards many other banners complained that “we eat the rubbish” while others, the taxi sector, criticised the City Council for failing to grant more licenses, while those being issued to VTC (Uber and Cabify) are on the rise. Many residents blew whistles and beat drums as they marched.

The march was halted at the N332 La Zenia roundabout by a contingent from the Guardia Civil as some of the protesters tried to cross the road and stop the traffic. They were subsequently diverted to the bridge, but all the while they were encouraging drivers to sound their horns in support of the peaceful march.

Having crossed the road the protesters then gathered alongside the abandoned shell of the Emergency Centre which, despite the repeated promises of the Orihuela Administration, remains an empty husk with still no indication of a date for its completion.

Speeches followed by the march organiser, Felix Arenas, in which he reiterated the demands of the 25,000 registered voters, where almost 80,000 people reside, and whose population multiplies three or fourfold in the summer months.

Together with a number of other community leaders, including FAOC and the Coastal Party, CLARO, he spoke of the lack of investment and the abandonment of the promised Urban Plan “that could lead to the collapse of coastal infrastructure in a few years’ time, because of the enormous growth in construction, which is almost 4,000 homes in this year alone”.

But, above all, the main complaints of the residents focused on “poor street cleaning, a lack of maintenance of green areas and refuse collection”. Arenas spoke of “the failure of the Mayor to keep his promises and plenary agreements in respect of such projects as the eco-park, the multicultural centre – auditorium and the library, and of course the many subsidies and investments that have been lost, demonstrating a lack of political will towards the coast”.

He reminded his supporters that Orihuela Costa contributes 60% of the funding in the municipality “but receives only a fraction back in return”.

Other requests were for a greater police presence, particularly during the summer when, on some nights, there is only a single duty patrol. There were calls for an improved bus service, especially to the hospitals, medical centre and Orihuela City, youth clubs for the area’s youngsters, sports activities, with the cost of using the CDM far too expensive for many families, a dedicated welfare worker for the coast and an employment office where the unemployed can register and obtain assistance as they look for work. Currently, despite there being no transport between the Costa and the City, they have to travel to Orihuela to register as unemployed.

One of the speakers said that if there is not a satisfactory response from the council to the residents demands they fully intend to take the protest to Orihuela City where they will protest outside the City Hall and where they will ensure that their message fully understood by the mayor, and where he won’t be able to bury his head in the sand.

Meanwhile there was also a protest in La Mata where residents held a loud demonstration outside their local town hall.

They too were demanding better support, improvements to the wooden promenade and more investment in road signs, lighting, refuse collection and sports facilities

The mood in La Mata is becoming increasingly heated with residents saying that they will continue to make their complaints until the Torrevieja government, chaired by José Manuel Dolón, hears their demands.

Two weeks ago they blocked the N-332, while on Friday the protest was taken to the local Town Hall where dozens of people gathered with whistles and drums making as much noise as possible. They stated that the promenade that runs parallel to the sea from the Plaza de Encarnación Puchol is extremely dangerous, with numerous loose and broken boards, which results in accidents day after day and is in need of urgent repair.

One tense moment saw the protesters try to access the town hall, eventually getting through, despite a police cordon. Once inside the building they continued to chant their demands and called unsuccessfully for a meeting with the mayor.

While the mayor has always said that repair of the wooden walk is the responsibility of the Ministry of the Environment, the PP, in their opposition, believe that this situation has been reached because the City Council has not invested anything in the maintenance of the promenade for many years.

But in reality, the residents really don’t care who repairs the walkway providing the work is carried out. What they want is to be able to stroll along it once again in safety, and they warn that they will continue to protest until their demands are met.