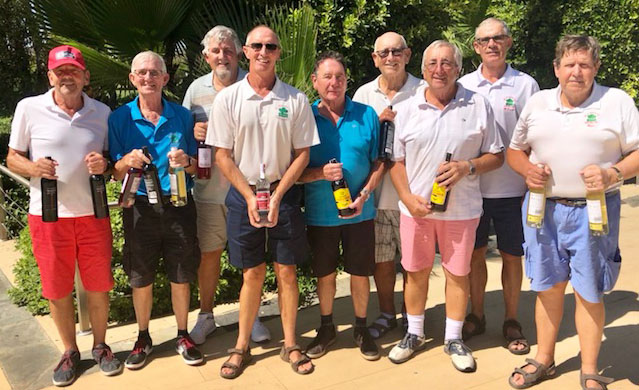 The winning team (6 Birdies/2 Bogies) did so by virtue of a higher handicap of 0.1. The team finishing second (7 Birdies/3 Bogies) had an identical handicap as the team finishing third (5 Birdies/1 Bogie ) but had a better last nine holes on Count Back (25 shots against 26).

If anyone would like to join our Society, we play at El Plantio Golf Club every Tuesday, Friday and Sunday. We use both courses – the Par 3 nine hole course and the main 18 hole course, so we cater for all abilities.

The membership rates are very competitive, so call for more details. Anyone who wishes to play in the Society as a guest or join as a new member, contact Ian Henderson on 966 716 616 or 636 116 230

For a change, John Wilby took this photograph instead of appearing on it.

Murcia’s professionals, the keepers of golf