La Nucía returns once again to the Middle Ages to celebrate its 313th birthday; on the 9th of July in the Year of our Lord 1705 an official document was signed that established La Nucia as an independent settlement.  Instead of a huge cake with far too many candles, the town has decided to celebrate the event every year with a Medieval Market.  For the fourteenth year running, the streets between the square in front of the Town Hall down to the old “lavadero” (where the women of the village used to wash their clothing) will be decorated with flags and bunting, and lined with stalls to create a medieval setting.

La Nucia Town Hall has once more asked Amata to organise the event.  Amata, the regional association interested in maintaining and improving craft standards, will make sure that what is sold on the 70 stalls is of good quality and made by the craftsman or craftswoman on the stall.  Nothing from big or little factories, nothing imported – it’s all original, which is why Amata uses the slogan “Artesanía de Autor®”. 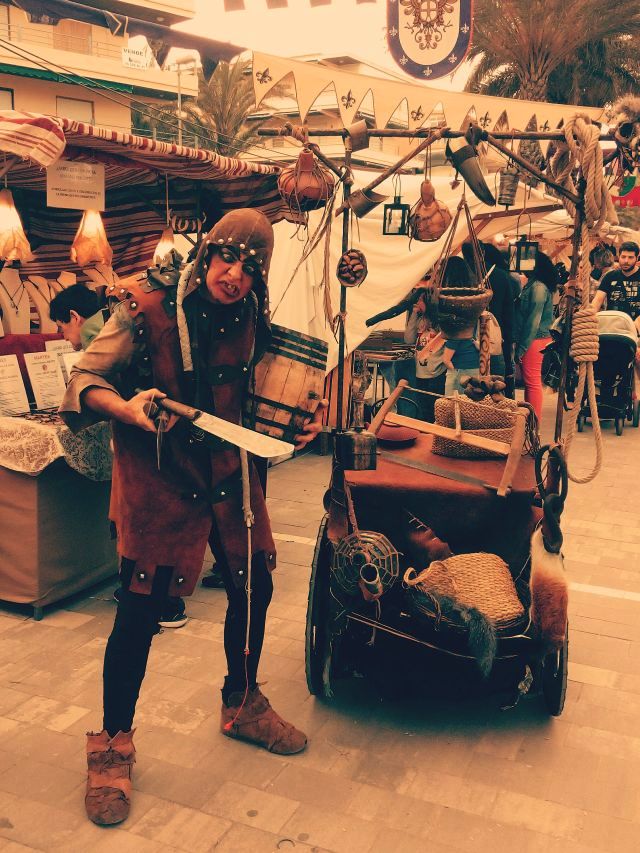 The Market will not just consist of some stalls in medieval style with stallholders dressed as medieval merchants, there is also a very active programme of live medieval music, street theatre and jugglers who close the market every evening with a fire show.  This year a group of knights and their ladies will set up a small “campamento” and give us an idea of military life in medieval times.  The knights will fight, organize archery workshops, parade through the market, and later in the evening they even invite the public to learn the first steps of some medieval dances.

Besides theater and music, you can watch several craftsmen and woman at work: the black smith, two potters (who let you have a go at making your own little bowl) and a paper maker.  In fact, the people in this market not only sell original work, but many of them can add an extra touch on the spot, or take orders for some special design.  After all, these are craftsmen and women – and you can help them keep their craft alive.

After wandering around the market, visitors can restore their tissues with a beer or roast meat at the medieval tavern, a glass of tea in the Arab tea tent or try out traditional boiled “pulpo” (octopus) served with potatoes on wooden platters.  Other stalls sell cheese, pressed fig bread and sausages made to medieval recipes and there is even a baker selling bread straight from his wood-fired oven.

The children can visit a small animal farm, have a ride on a pony or a medieval merry-go-round, or play table games in the medieval ludoteca.  The market in La Nucia will be open on Friday 6, Saturday 7 and Sunday 8 July from 6 pm and go on till midnight (or perhaps a little later).  For more information ring 639 979 678 (in English) or look at http://www.amata.es/LaNucia%2017.html to see photographs of last year’s market.

No British tourists for Benidorm until the end of July